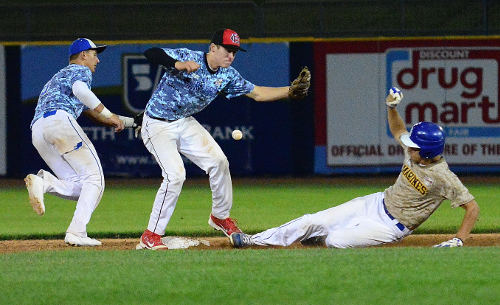 EASTLAKE—The Air Force All-Stars nearly pulled out their first win in three tries against the Marines All-Stars but settled for a 9-9 draw in the 2015 Ohio Varsity All-Star Classic presented by Scorestream.com at Classic Park on Sunday.

Two big innings allowed the Air Force All-Stars, sponsored by the Geauga Maple Leaf, to turn a 7-0 deficit into a 9-7 ninth inning lead. The Marines, sponsored by IrishIllustrated.com, rallied for two unearned runs in the bottom of the ninth to force an extra inning but neither team pushed across a run in the 10th and the game ended in a draw.

“They took advantage of our walks early in the game and they scored their six or seven runs off that,” said Chardon coach Brian Long, who coached the Air Force. “But, this is an all-star game. Every guy can play. You’ve got 20 guys on the roster and they knew they could come through. We knew in the dugout we’d eventually chip away and that’s what we did. We took advantage of some of their mistakes and put some timely hits together. It was nice for our team.”

Mentor’s Tyler Thompson and Mayfield’s Joe Caporale drew back to back walks to set the table for the Marines in the bottom of the second. Hawken’s Tommy Murphy then hit a one-out single to load the bases and Gilmour Academy’s Grant Weiss and Nick Regalbuto both walked to make it 2-0.

Weiss scored on a wild pitch to put the Marines up 3-0 and Kenston’s Jimmy Artale followed that up with a two RBI single to make it 5-0. Gilmour’s Ethan Pawlak doubled home Artale to close out the Marines’ big inning.

The Marines, who had won the previous two Ohio Varsity All-Star Classics, added another run in the third when Aurora’s Devin Bradley reached on an error and scored on a Weiss ground ball.

After collecting four of their five hits and drawing eight walks in the first four innings, the Marines struggled until they scored two runs on three errors in the bottom of the ninth. They picked up just one hit and two walks in the final six innings of the game and left the winning run on second base in the 10th.

“The big inning early kind of put us to sleep a little bit but these guys are good players, all of them, and they had their pride on the line,” said Willoughby South coach Steve Norris, who coached the Marines. “They didn’t want to go down.”

It took a while but the Air Force bats finally came alive in the fifth.

The Air Force added another in the top of the seventh when Chardon’s Jared Erasmus singled with two outs and scored on a passed ball.

A four-run eighth gave the Air Force their first lead.

Independence’s Daniel Mathews led off with a single to center, North’s Cody Cantrell was hit by a pitch and Chagrin Falls’ Max Maistros singled to load the bases. Mathews scored on a single by Chardon’s Michael Cardina and Cantrell tied it when he scored on a fielder’s choice. Wasser struck out but Maistros scored on the throw down to first to give the Air Force its first lead at 8-7. Ward would make it 9-7 when he scored on an error.

Erasmus struck out the first two batters in the bottom of the ninth but Perry’s Joe Medlen reached first on a dropped third strike. That opened the door for the Marines to tie the game.

Berkshire’s Luke Byler then reached on an infield error and Medlen and Byler both scored on another infield error that tied the game at nine.

Both teams left a runner on base in the tenth.

“It was a good game,” Norris said. “The kids were pumped from the get-go. All-Star games usually have a loss of intensity or focus but these guys were in it from the get-go, the whole way through.”

Balazs was 2-for-2 with a walk and two stolen bases to lead the Air Force All-Stars at the plate. Independence’s Nick Niro, Erasmus, Mathews, Maistros, Cardina and Fenner also had hits for the Air Force while Komertz posted a game-high three RBI.

Regalbuto was 2-for-4 with an RBI, three stolen bases and a run scored to pace the Marines. Murphy, Artale and Pawlak had the other hits for the Marines.