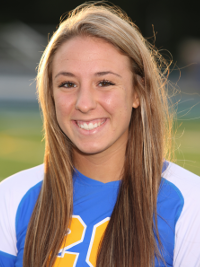 Senior Megan Screptock was named Independence’s Athlete of the Week for the week ending Oct. 26. The senior captain and outside hitter led the Blue Devils to their second straight Elyria Division III district championship.

In the championship game against Elyria Catholic, Screptock recorded 17 kills, three serving aces, 13 digs and posted a 2.6 serve receive (out of 3).

Screptock has proven to be a constant force offensively and defensively for the Blue Devils during the season.

She is a dedicated motivator to her teammates and a committed leader to the volleyball program. Her hard work, athleticism and knowledge of the game is hard to come by and she was one of the best to ever play in the program.