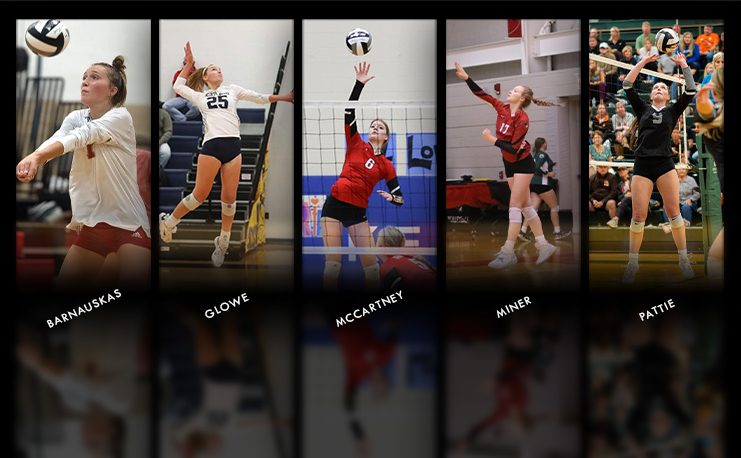 The five finalists have been selected for the 2022 Ohio Varsity Volleyball Player of the Year.

This award will be presented during the 2022 Ohio Varsity Senior Slam on Nov. 20 at Eastlake North High School.

Finalists were nominated by their coaches and then selected by a panel of area coaches as well as the Ohio Varsity staff.

A senior middle hitter/middle blocker, Barnauskas had recorded 226 kills, 46 blocks, 97 points, 30 aces, 149 digs, 10 assists, and 246 service receptions at the time of her nomination. Barnauskas earned first-team all-Chagrin Valley Conference honors as a senior and a junior, and was an all-district selection last fall.

“Aimee Barnauskas is the best player on our team,” said Crestwood coach Wanda Hoffman. “Aimee usually doesn’t leave the floor unless we are going to win and allow another player to get playing time. She is a very aggressive hitter. She plays middle hitter/blocker and middle back for us. Barnauskas is a threat when it comes to serving. Aimee will receive her third letter this year.”

The senior outside hitter capped off a stellar career by earning the CVC Valley Division MVP award. Glowe, a four-year starter, helped the Hornets to win back-to-back district titles for the first time in school history. In 83 sets, she recorded 363 kills with a .357 hitting percentage, 50 blocks, 54 service aces, 214 digs, and 25 assists. She recorded her 1,000th kill in the final game of her high school career.

“I’ve been both happy and impressed with Natalie’s growth throughout this past season,” said Kirtland coach Arlayna Newcomer. “She really stepped up in a big way for her team and has improved physically, mentally, and emotionally. I’m excited for what her future will hold; I know it’ll be bright.”

Junior outside hitter/defensive specialist Emma McCartney already had recorded 352 kills, 256 digs, 37 blocks, 33 aces, and 132 service points at the time of her nomination, and she’s still hammering home the kills as Chardon won a Division I district title. McCartney was named the 2021 and 2022 Western Reserve Conference Player of the Year.

“Emma is an incredible athlete with a very high-level volleyball IQ and could be a star in any position on the court for Chardon,” said Chardon coach Alison Fisher. “As one of our team captains this season, she is a leader on the court. She uses her knowledge of the game to make those around her better. As a sophomore, she was selected for WRC Player of the Year. Her stats throughout the season have consistently ranked her among the top of the News Herald rankings in multiple categories. In the News Herald ranking, she finished the season leading the ‘kills’ for Northeast Ohio.”

Miner, a sophomore outside or right side hitter, recorded 241 kills with a .337 hitting percentage, 33 aces, 35 blocks, and 58 digs at the time of her nomination. She earned first-team all-Chagrin Valley Conference honors this season and was a second-team selection as a freshman.

“Madison Miner is an all-around excellent player,” said Perry coach Mike Fitzgerald. “She has been instrumental in all of Perry’s games, whether a win or loss. She is on pace to break any kill records that have been kept for Perry volleyball. She is nearing 500 kills in just two seasons. Madison’s stats speak for themselves. She leads the area in kills and hitting percentage. She’s a great spot server, which shows with her 33 aces. Madison is a great teammate.”

Pattie, a junior setter, had recorded 763 assists, 133 digs, 70 kills, 24 aces, and 21 blocks at the time of her nomination. Her numbers continue to climb as she has helped the Cougars advance to the Division III regional tournament.

She was named the 2021 and 2022 Crown Conference Setter of the Year and earned honorable mention All-Ohio honors last fall.

“Hannah carries our team to many of our successes with her incredibly well-run offense, scrappy defense, and aggressive serving and net play,” said Lake Catholic coach Kara Oster. “She is the jack of all trades and leads our team with her fire and passion for the game.”

Fan voting was for fun and to help recognize each of the five players for an outstanding season. Fan voting had no impact on the actual Player of the Year award.

Crestwood out to surprise