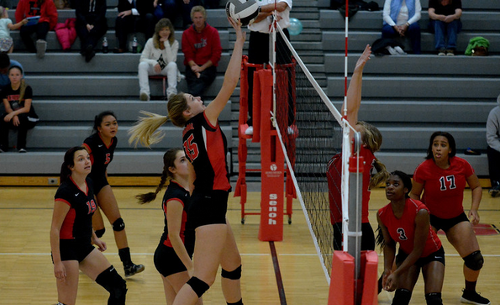 MIDDLEFIELD—The emotions of Senior Night didn’t affect Haley Adams or Caitlyn Lechene. The two combined for 15 kills to lead Cardinal to a 3-0 sweep of Harvey on Tuesday.

Adams posted a team-high eight kills while Lechene had seven and also contributed with 10 digs.

“I was a little bit nervous about that because sometimes when we have a lot of stuff going on the girls are not focused,” said Cardinal coach Karisca Chambers. “The two seniors came out and I think they knew it was their last home game of the season so they wanted to make a lasting impression, not only on the teams and the fans but something they can remember for the rest of their lives. They did a nice job. They not only were leaders, they played very consistent.”

The seniors were honored before the game then went out and took care of business.

Cardinal won the first and second sets 25-6 then closed out the match with a 25-5 win in the third set.

The Huskies improved to 14-2 overall and clinch a share of a third straight Chagrin Valley Conference Valley Division title with a win at Cuyahoga Heights on Thursday.