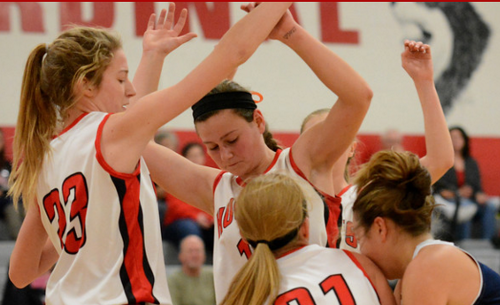 Adams, Leichtman step up for Huskies in win at Hawken

Haley Adams scored just two points but her defensive effort down the stretch could have been the biggest play of Cardinal’s 26-23 win at Hawken on Saturday and maybe the key moment the Huskies need to turn things around heading into the second part of their season.

Trailing by three, Hawken had a chance to tie the game but Adams sprinted from one side of the floor to the other to put herself in position to take a charge. The Huskies held on for the win.

“In a lot of ways that was a game saving play there,” said Cardinal coach Luke Kruse. “It was one of the most important plays of the season. It was a hustle play, a gritty play. It wasn’t a beautiful game for us but that kind of a play is an example of what we had to do to come out of Hawken to get a win and it was probably one of the best plays of the season.”

With the win the Huskies improved to 6-8 overall and 2-6 in the Chagrin Valley Conference.

“There was a lot of emotion and energy that went into a rivalry game like that where we did a lot of things to put ourselves in a position to win but ultimately they came out on top,” Kruse said. “I was glad on Saturday, the girls, a lot of them were a little bit fatigued, and I didn’t know quite how we’d come out. Thankfully we did the things that we had to do to come out on top and be successful down the stretch.”

Cardinal picked things up on the offensive end in the second half to come from behind in the win.

Delaney Leichtman stepped up to post a game-high 11 points and Emily Kruse pitched in with five. Allissa Nevison added four and Adams, Camille Cummins and Ashley Gubanyar each contributed with two points for the Huskies.

“We had a conversation a couple weeks ago just about what she had to do to get back her form because she started out the season really on a hot streak,” Kruse said of Leichtman. “She put some of those things into practice and has been more assertive on the offensive and defensive ends. She’s been really clutch for us the last couple games and has provided an offensive spark for us when we struggled to get to the basket. She knows when to pick her spots and be more assertive because she knows she is one of the players on the team that can get a shot off when we’re struggling to find a shot on the offensive end.”

Cardinal has a week off before starting a difficult stretch of CVC games with Independence, Kirtland and Richmond Heights.