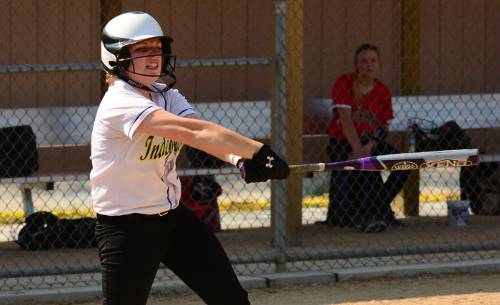 Rega, who took over as Independence’s starting pitcher when Victoria Sirna suffered a finger injury last week, allowed just six hits in shutting down Oberlin’s offense for most of the game.

“I hate to keep calling her a freshman because at this point she’s pretty seasoned,” said Independence coach Garry Moore. “She had a pretty tough strike zone out there so the nervousness set over me very quickly. There were a couple of times she was ahead in the count and I just called for the fastball and they hit her pretty good. She only gave up six hits and three of them came in the last inning. Other than that she shut them down pretty well.”

Independence’s offense set up Rega with a four-run cushion in the first inning.

“It was nice to come out in the first inning and get four runs,” Moore said. “That was very helpful.”

Oberlin scored a run in the top of the second on a pair of singles then Rega took control. She retired the next 12 Phoenix batters.

“In her first inning she went 1-2-3 and we had a 6-4-3 double play,” Moore said. “The run they scored in the second started out with a single and got to second on a wild pitch then scored on a single. She shut them down until the seventh inning. She went 1-2-3 in four consecutive innings. She was in command.”

Independence added another in the third when Adams hit a solo home run.

“She crushed the ball to right center and she had a running, diving catch in right field,” Moore said. “She plays well out of her comfort zone and above her skill level. That’s just a kid that wants it that bad.”

Adams, who finished the game with the two extra base hits and three runs batted in, credited the defense for pulling out the win.

"It was a great way to start off the tournament as well as a great way to finish off our season at home," Adams said. "Our defense was key to the win. Everyone was doing their job and making the plays they needed to. I've been working on my hitting a lot this season and it feels good when I'm able to come through for the them and contribute when I need to."

George and Sirna also had hits for the Blue Devils, who advanced to the Avon Lake District Semifinals. The Blue Devils will play top-seeded Laurel on Tuesday.