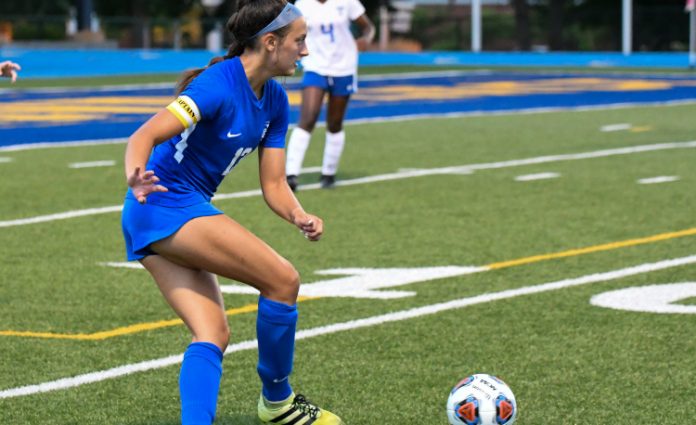 Alana Nowak also scored for the Blue Devils, who improved to 4-2-2 overall and 2-1-2 in the Chagrin Valley Conference Metro Division.

“Alana and Alex really took control offensively for us, especially in the first half,” said Independence coach Bryan Less. “Alana scored off a deep throw-in from Addie Westerburg. After that, Alex took a pass from Alana and two from Hannah to convert two deep shots and a breakaway. The hat trick came on only six shots from her.”

Eliza Wills and Ava Gabriel both scored for Wickliffe, but the night belonged to Adams, who now has 12 goals on the season.

“I’m very happy with the way things played out tonight,” Adams said. “As a team, I think this was one of our best performances. We worked well connecting our passes on the offensive side and communicated well on the defensive side.”

Adams capitalized on precision passing from her teammates.

“My first goal was a breakaway off of a beautiful through ball from Alana that I passed into the right corner,” she said. “My second was from the corner of the box off of Hannah (MacRaild’s) pass that looped to the top right of the goal. Lastly, my third was from the top of the box off of another Hannah cross where I turned and shot it into the left corner.”

The Blue Devils led at halftime, 3-1.

“Wickliffe stepped up after the half and played really hard, so I have to give our defense credit,” Less aid. “They didn’t really give up clean looks and made Wickliffe work for their shots. Keely Sears came out of the net a bunch of times to clear away long balls, which is something she is getting a lot better at.”

Seers finished the game with 11 saves.

The win snapped a bit of a skid for the Blue Devils who went three games without a win. They lost on Sept. 2 to Cuyahoga Heights and then tied in back-to-back games.

“This was a big win for us,” Adams said. “Coming off of two ties and a loss, this really puts us back on track. What makes it even better was that this was against a team we have battled hard with over the past couple of years. That being said, it’s always nice to win the battle of the Blue Devils.”

Gabriel and Leah Skufca both recorded assists for Wickliffe and Gabriella Ervin finished the game with two saves.

Edgewood focused on effort and defense