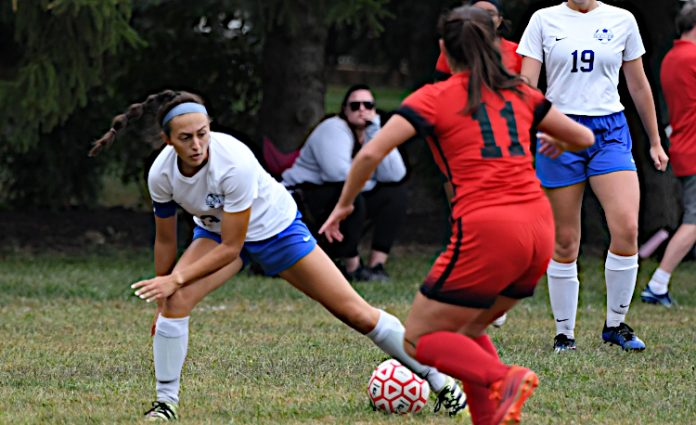 MENTOR—Alex Adams tied a school record with five goals in leading Independence to a 9-2 non-conference win at Cornerstone Christian Academy on Tuesday.

Adams scored all five goals in the first half as the Blue Devils built a 6-0 lead at the break.

“My key to success was our great passing up top,” Adams said. “I was provided with so many good through balls and assists to help get me there.”

Tying the school record for goals scored in a game is something Adams won’t soon forget, especially now that her name will be added to the leaderboard posted at the school.

“It’s awesome to see my name on our record board,” she said. “Walking past it every day, I never imagined that one day mine would be up there as well.”

Alana Nowak also recorded a hat trick in the win and Mandy Kaufman scored her fourth goal of the season.

“Two of the sophomores, Eliza Botzman and Mandy Kaufman, played their best games of the season,” said Independence coach Bryan Less. “They brought energy and toughness, which was not always showing up early in the season.”

Keely Sears recorded one save in the net and Maria Bellitto saw her first action back in the goal since suffering a knee injury.

“Ever since I tore my MCL and part of my ACL in the indoor season, my goal has been to get back in the net, the position I have played my entire soccer career,” Bellitto said. “I was nervous at first, but after the first few minutes, it all felt natural again. Being in the net feels like home to me and getting the opportunity to walk on the field again with my gloves and jersey on was such a great feeling.”

With the win, Independence improved to 5-2-2 overall. The Blue Devils host Brooklyn on Thursday.