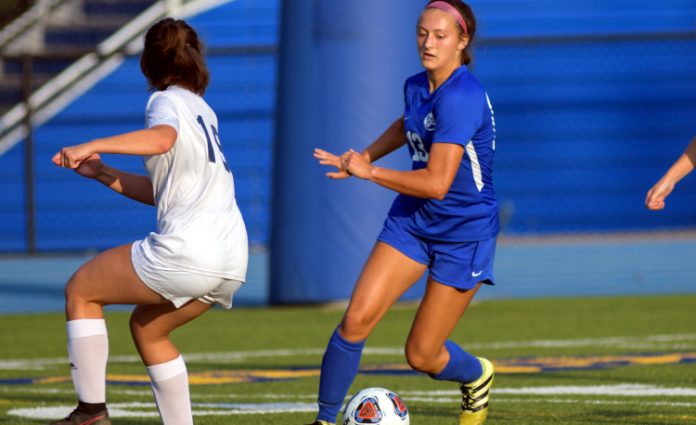 With the hat trick, Adams now has scored 27 goals on the season tying the school record for goals scored in a single season set by Jennifer Wisniewski in 2012.

“Tying the school record was really cool,” Adams said. “It really reminds me of all of the work I have put into the sport and how far it can take me.”

Mandy Kaufman notched her fifth goal of the season off of a Casey Adams shot set up by an Alana Nowak corner kick.

“Alana crossed the ball over to Casey Adams and she took a shot,” said Independence coach Bryan Less. “Mandy Kaufman was in the right spot and got her hips around to put it in the net.”

Alex Adams changed the game when she found the back of the net with just two seconds remaining in the first half.

“It was very important for us to come out strong our first game and set the tone,” Adams said. “This game really brought our confidence up and solidified our teamwork.”

Central Christian did its best to slow down the Blue Devils, but patience and opportunity allowed Independence to create and capitalize on their opportunities.

“We dominated play but they were so compact that it was hard for us to get clean shots in the box,” Less said. “Most of our shots were from far out and Alex was rushing a little bit. Eliza Botzman was playing left mid and she saved a ball with 10 seconds left–with the countdown going on–and passed it to Alex at the corner of the box. Alex hit a laser, one of her low line drives, to score right before halftime.”

That two-goal lead allowed the Blue Devils to play more aggressively in the second half and it paid off with five goals.

Maria Bellitto scored first in the second half to push the Independence lead to 3-0 and then Adams notched her second goal of the game. Nowak added her 12th goal of the season and Adams punched in her third of the game to make it 6-0.

Makenna Rini’s second goal of the season closed out the scoring.

“That was the first game that from start to finish we played hard,” Less said. “That’s something we’ve been working for all season with a lot of newer and developing players. We worked hard for 80 minutes. That was nice to see.”

Defensively, the Blue Devils recorded their fifth shutout of the season.

“Casey Adams played really well from start to finish,” Less said. “She got some balls and dribbled around some players to push it up into the offensive end. Jessica Harb had her best game in a while. She was very solid and same with Addie Westerburg.”

Independence travels to Columbia on Thursday for a sectional championship game.

Kirtland surges to win over Berkshire