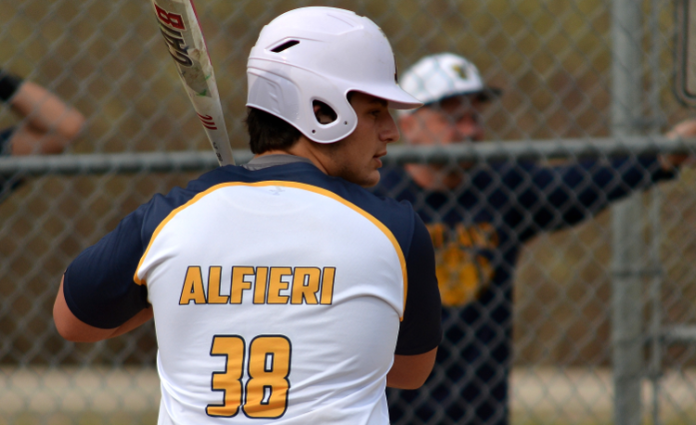 With the win, the Hornets avenged their first Chagrin Valley Conference Valley Division loss—a 7-5 setback to the Bison on Tuesday—and improved to 9-4 overall and 8-1 in league play.

“I asked the guys after yesterday’s loss, ‘How are you going to respond?’” Kirtland coach Luke Smrdel said. “They all knew how big of a game today was and they got the job done against a very good team.”

With the game tied 2-2 in the bottom of the eighth, Jack Dever led off the inning with a single and moved to second on a groundout. Joey Mongelluzzi and Mason Sullivan drew back-to-back walks to load the bases.

Beachwood recorded the second out of the inning before Alfieri hit a 2-2 pitch into left-center to end the game.

“Mike has always been a pull hitter, but this year we have focused a lot on trying to get him to use the entire field and over the last two games that has started happening,” Smrdel said. “He got his pitch and smacked it to left center. This is a great sign heading into the home stretch of conference play.”

Alfieri was 1-for-3 leading up to that final at-bat.

“I went up to bat knowing I needed to come up clutch,” he said. “I wasn’t trying to do too much, I just knew I needed a hit, so I went up and saw a nice fastball coming my way and delivered. It was very exciting and felt great. Knowing I helped my team get a win we wanted was nice and we are glad we came back from a tough loss to them yesterday.”

Vinny Liuzzo had an RBI single in the bottom of the second to give the Hornets a 1-0 lead.

Beachwood scored two runs on two hits in the third to pull ahead, 2-1, but the Hornets tied it in the bottom of the sixth on singles by Mongelluzzi and Seann McGill.

“We were able to overcome a lot of base running mistakes,” Smrdel said. “That’s something we definitely need to clean up if we want to be successful moving forward.”

Pierce Boyd started for the Hornets and allowed just the two runs on six hits and he struck out three in his varsity debut that last 6 2/3 innings.

“Pierce constantly impressed me throughout the entire preseason and I knew he would be ready when he got his shot,” Smrdel said. “He’s a kid who knows what it takes to be a great pitcher and he did a fantastic job today by getting ahead of batters, limiting walks, and kept their batters off balance. Today’s effort is even more impressive since he’s only a freshman and this was his first career start.”

McGill threw the final 1 1/3 innings to pick up the win. He struck out two and didn’t allow a hit.

“Seann did great coming out of the bullpen today,” Smrdel said. “He pounded the zone and challenged their hitters with his fastball. He’s played in a lot of big games for us, so he knew how important it was to come in and get the job done.”

Kirtland rushes back to state final