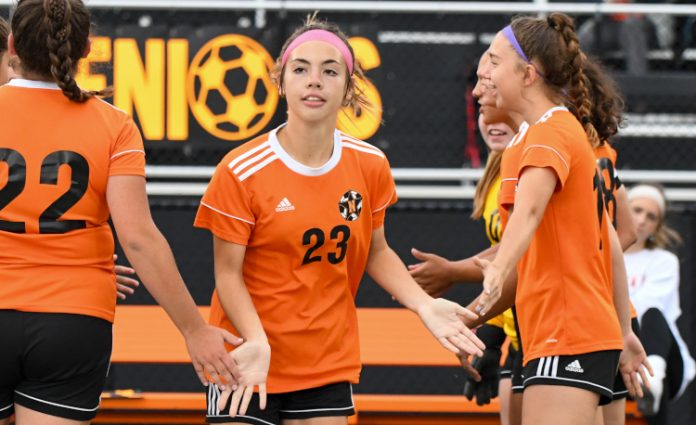 Vanessa Anthony scored a pair of goals in North’s 2-1 non-conference win over visiting Lakeside on Saturday.

With the win, the Rangers improved to 7-6 overall.

“It was nice to see us get back to our style of play and it was one of the most composed games we have played in a while,” said North coach Rick Sirl. “It is encouraging to get so much solid play from the freshmen this year, especially Brennan and Michaela Herbert, along with the organization and on-field leadership from Kimmie Stewart and Sydney Helm.”

Herbert assisted on both of Anthony’s goals and now leads the Rangers with six assists.

With her brace, Anthony now is tied with Sally Dempsey for the team lead with three goals.

“My key to success this season is executing what I’ve been working towards at practice and putting that on the field,” Anthony said.

Anthony scored both goals off of through balls. She split the defense and made a run to the goal.

The seven wins are the most for the Rangers since they won nine games in 2015.

“Another win was definitely an exciting experience that as a team feels well deserved with the hard work and dedication we’ve put in this season,” Anthony said.

North travels to Riverside on Tuesday.