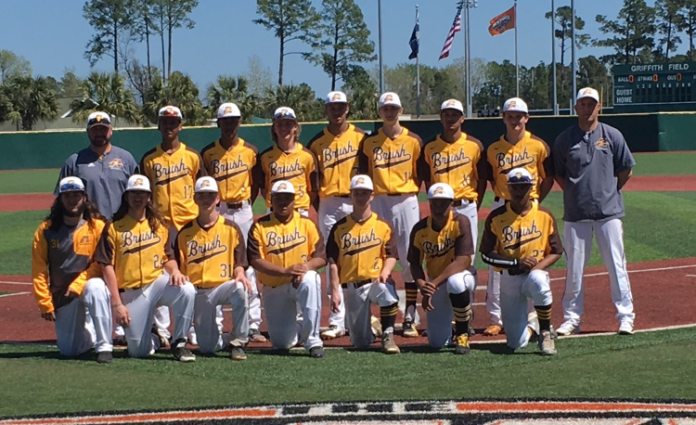 With five returning starters from last year’s squad that finished 12-11 overall and 5-9 in the Western Reserve Conference, the Brush Arcs are ready to take the next step.

With that renewed confidence the Arcs hope to be competitive in league play and beyond this spring.

“My expectations are to be competitive and give ourselves a chance to win each game,” Brush coach Brett Munn said. “We had a nice turnaround season last year and are looking to improve on our 12-win season. Our guys have a lot of confidence after what we did last year in beating the top two teams in our conference in Kenston and Mayfield. They saw firsthand that if they throw strikes, make the routine play and put the ball in play, that they will have a chance to win most games.”

“We lost pretty much all of our pitching staff to graduation,” Munn said. “Last year’s top two starters threw 96 combined innings and last year’s seniors threw 124 out of the 147 total innings pitched. Additionally, we graduated our catcher, shortstop and three outfielders. Our backup catcher returns and we have some younger guys who will fill out this year’s outfield.”

That turnover puts the onus on seniors Jake Young, Michael Kornet, Adam Eckman, Myles Brown and Nate Colbert to provide the leadership in the everyday lineup.

Young will catch, Kornet, who earned honorable mention All-WRC honors after he batted .283 with 14 runs batted in, will play first and Eckman will play second.

“Michael Kornet is one of the top defensive first basemen in the conference,” Munn said. “Michael probably won us a couple of games early in the season last year with his ability to scoop the ball. Michael is a very good contact hitter and rarely gets overpowered and will hit in the three-hole for us this season.”

“Myles Brown has the most upside of any of our players on our roster this year,” Munn said. “He has good size (6-foot-3, 195 pounds), speed and athleticism. Myles will once again hit in the middle of the lineup and play third base. He will also be in the top of our pitching rotation. He logged 13 2/3 innings as a sophomore and 18 2/3 innings last year. He worked all offseason strengthening his arm and improving his accuracy on the mound, so we are expecting big things from Myles this season.”

Yatsko and Thompson will split time in left field, Presley will be the designated hitter, pitch and play third, Littlejohn will line up in right and pitch and Jones has shortstop locked down and will also see time on the hill.

Junior Jackson Shorter and sophomore Jared Wittels also will pitch for the Arcs.

“One of our strengths is our pitching depth,” Munn said. “We have six guys that I believe can be successful at the varsity level. Another strength is our defensive versatility. All of our players can play multiple positions, which will give us some options depending upon who is on the mound that day.”

Munn expects Shorter to anchor the pitching staff this spring.

“He throws strikes and has good movement on his ball, so we believe that he will be very effective for us,” Munn said. “Jackson will also play second and third base for us and has shown a lot of improvement from last season at the plate.”

The Arcs have the potential to build off their success last season but first, they’ll need to find a way to play together all at the same time.

“We have yet to field our starting nine in any practice or scrimmage due to injuries and illnesses,” Munn said. “Some of our top players haven’t been available all preseason and at this point, depth is not one of our strengths, so we need everyone healthy once the season starts. Second, we need our returning varsity starters to produce offensively. We return five starters and those guys are going to be counted on to carry the load early on in the season until the newcomers become acclimated with the speed of the varsity game.”