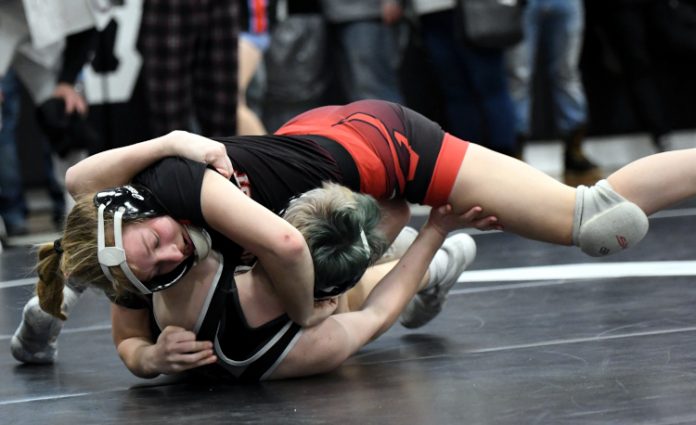 Lutheran West had four wrestlers qualify for the state tournament on the way to a third-place finish as a team. Mentor finished fifth with two state qualifiers.

The Longhorns and Cardinals also finished near the top in total pins in the least amount of time. Lutheran West was second with 10 pins in 19 minutes, 43 seconds and Mentor was fourth with seven in 10:09.

Junior Catie Kerr of Lutheran West and senior Erika Novak of Mentor both finished second in their respective weight classes.

Kerr went 3-1 with two pins and a decision at 120 pounds and will make her third straight trip to the state tournament.

“I’m so glad I have the opportunity to go to states for the third year in a row,” Kerr said. “I don’t think my season would’ve felt complete if I didn’t make it because I’m so used to going now.”

Last winter, Kerr finished third at 116 pounds and then went to Columbus and finished 1-2 for the second straight season at the state tournament.

This winter, Kerr is more confident than ever and understands what it takes to succeed at the highest level.

“Multiple people had told me that this was it and to just have fun and leave everything out on the mat and I think that advice really helped me get where I needed to be mentally in order to pull out the wins I had,” she said. “This sport isn’t just extremely physical but so much of it is also mental, and you can’t break mentally because as soon as that happens, you lose. I made sure I was ready mentally more than anything else.”

After flattening her first two opponents, Kerr got all she could handle from Keystone’s Lydia Gould in the semifinals.

Gould recorded the first takedown of the match but Kerr earned a reversal and three back points to lead 5-2 after the first period. Kerr made it 6-2 with an early escape in the second but Gould scored another takedown to cut Kerr’s lead to 6-4. A reversal gave Kerr an 8-4 lead heading into the third period. Gould chose to start the third in the neutral position and took Kerr down to her back for a 9-8 lead with less than a minute remaining in the match.

Once again, Kerr reversed Gould to her back to win, 12-9.

“I was so relieved I pulled out that win that I actually started crying,” Kerr said. “I don’t think it processed in my mind what actually happened until I saw my coach afterwards smiling and tearing up because I actually did it. I had been really nervous and I knew the girl I was going against was good competition, so the fact that I pulled it out couldn’t have made me happier.”

Kerr’s run came to an end in the championship bout when Akron Manchester’s Jaydyn McKinney pinned her in the first period.

Always the optimist, Kerr looks at that loss as a learning opportunity.

“That final match taught me that sometimes we don’t win them all, but from those losses we need to figure out our mistakes and make sure to not make those same mistakes again,” she said. “For the next week, I’m going to practice extra hard and get where I need to be in order to make it as far as I can.”

Novak, a second-year wrestler, went 1-1 in finishing second at 145 pounds.

“It is super exciting to earn another trip to the states meet, especially since I only picked up this sport last year as a junior,” Novak said. “I am super pumped and excited; I cannot wait.”

She drew back-to-back byes to open the tournament and then scored an 11-0 major decision over Lutheran West’s Jaeyla Reyes to advance to the championship bout.

“My strategy in my first match was, ‘drive, drive, drive,’ and do not overthink when on top,” she said. “I knew I had to win that match if I wanted to go into the first–place seed and improve majorly from last year.”

Chippewa’s Isabella Adams opened the championship bout with a takedown right to Novak’s back and ended the match in 1:11.

“I learned that I need to keep my hips up, circle more, and be more aggressive when hand fighting,” Novak said of the setback.

Novak, who placed fourth at the district last winter, finished 1-2 at the state tournament. She’s headed to Columbus next week with much higher aspirations.

“My goal for next week is to just place,” she said. “In order to achieve that, I’m going to eat more, eat healthy, and really put in the work at practice with things that I need to improve and things that I do best.”

Nelson also recorded the tournament’s most number of pins in the least amount of time. She flattened five opponents in 6:23. Her only loss of the tournament was to tournament champion Gabrielle Gartin of Chippewa.

Zielinski recorded the tournament’s fourth-fastest pin when she stuck an opponent in 24 seconds.

Pirates bounce back with win over Gilmour