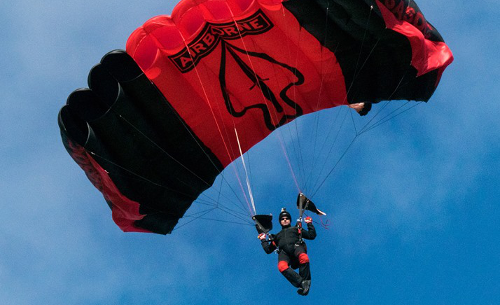 Army Black Daggers to drop in at Cardinal

The official U.S. Army Special Operations Command Parachute Demonstration Team, the Black Daggers, will parachute into Cardinal’s Richard A. Moss Stadium prior to kick off of Friday night’s game against Cuyahoga Heights.

The Black Daggers, comprised entirely of volunteers from throughout the Army special operations community.

Their jumps, which also will take place at Kent State on Saturday, and Cleveland Browns Stadium on Sunday, are in honor of Gold Star Mother’s Day, which is held on the last Sunday in September to honor surviving mothers of fallen service members, specifically those who died while serving on active duty.

The Gold Star service banner’s history is tied to the City of Cleveland. It was designed by an Ohio infantry officer and was adopted in September 1917 by the mayor of Cleveland, the Chamber of Commerce and the governor of Ohio. The banner was read into Congress later that month.

Upon completion of their jump, the Black Daggers will present the game ball for the Huskies’ matchup with the Redskins.

This is a once in a lifetime, unique event for Cardinal High School. Please plan to join us for this very special occasion. If you do come, please come early as we are expecting a large crowd. The jump will take place at approximately 6:50 p.m.