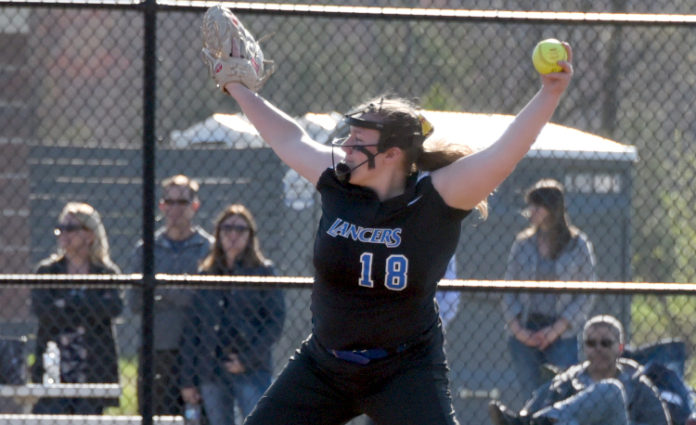 Gilmour Academy’s softball team is in the same position as every other area baseball and softball squad.

The Lancers are making the most of this unique situation following a two-year offseason.

However, the Lancers have grown accustomed to rolling with the punches and making the most of any situation.

“We have an unusual scenario at Gilmour, in that every year, we get a late start to the preseason due to the number of multi-sport athletes we have on our team,” said Gilmour coach Tony Bondra. “With Gilmour’s fall and winter teams usually making deep runs into the postseason, we normally don’t have a full squad to work with until a few weeks into March.”

This year, Gilmour’s softball team includes three starters from the Division II state championship volleyball team and several others who play JO volleyball. The Lancers also have eight hockey players, with five of those players competing on the 16U team that qualified for the national tournament.

Then there’s the basketball players and cheerleaders and the speech and debate team’s state qualifiers.

“As a result, we have yet to have our entire squad at the same practice,” Bondra said. “Basically, we have to adopt the mantra, ‘Work with what you’ve got.’ We tell the kids we never know who we might have on any given day, so it’s important for all of them to know how to play multiple positions well in order to give us the most versatility with our lineup.”

The upside to having so many multi-sport athletes on the softball team is the incredible athleticism each player brings to the table.

“I think we will surprise a lot of people with our athleticism and versatility,” Bondra said. “We don’t even factor in 2019 to our current predictions since players from that team have matured two full years physically, mentally, and emotionally-speaking, and are hardly the same people now as they were back then; and that’s a good thing. Not only are they stronger in all of those aspects, but they’re also hungry to compete. We have one of the most athletic rosters that Gilmour softball has ever seen and we can’t wait to get them out on a field together. Sure, we may be rusty to start having had a year off, but so is everyone else. Just seeing their initial excitement to be back together, working hard gets us excited over just how successful we can be this season.”

The Lancers finished the 2019 season with a 13-5 record overall and a 6-1 mark in the North Coast League.

Four starters return from that squad including junior pitcher Megan Mlinaric, a co-captain.

As a freshman in 2019, Mlinaric was named the NCL Offensive MVP and also set school records with 134 strikeouts in a single season and a single-season low earned run average of 1.29 in 86 2/3 innings of work.

“She is ready to put the team on her back whenever needed, whether on the mound or at the plate,” Bondra said. “She’s capable of making big plays, is a workhorse, and is always getting extra reps/lessons year-round. She has already set several program pitching records and will no doubt challenge the rest for both season and career as long as she remains healthy. She’s also a candidate to set several offensive records as well. She has a great bat and hits the ball hard and can also take it deep.”

Although she earned a scholarship to play volleyball at Pittsburgh, Klika’s athleticism translates well to the softball diamond.

As a sophomore, she set single-season school records with a .660 batting average and a .704 on-base percentage.

“She is one of the smoothest fielders you will ever witness,” Bondra said. “She has excellent range, great hands, and a strong arm. At the plate, she has a great eye. She is a solid line-drive hitter that can also go deep and is very aggressive on the base paths.”

Sophomore Laney Klika will team up with her sister as a formidable double-play combination.

A member of the state championship volleyball team, Klika is a solid defender who is equally dangerous at the plate and on base.

“On the diamond, she is just as strong defensively (as she is in volleyball) and can cover a great area of the field,” Bondra said. “On offense, she too has a great eye and is a solid hitter. She loves to run the bases and make things happen.”

“She not only excels on the ice but is just as impressive roaming the outfield,” Bondra said. “No doubt, she is one of the best in the area. She can cover a lot of ground, gets a great jump on the ball, has a strong arm, and excellent speed. At the plate, she is a solid hitter that will be hard to get out. She’s also a very aggressive baserunner who loves to make things happen.”

Goff will play left field while Schuh will start in right but also has the versatility to play in the infield. Bilant will catch, Pickering is slotted at third base, while Prebul will play first, and Peterson will serve as the team’s designated player.

“Clare is extremely athletic and versatile and is capable of playing every single position well, including pitcher and catcher,” Bondra said. “She has a great arm and strong bat. (Emma) has a great softball IQ, strong arm, and bat, and can also play the outfield well.”

Peterson and Prebul also will see time in the circle for the Lancers.

“We have great athleticism and versatility,” Bondra said. “Honestly, I think we’re strong in all areas. We’ve got speed and strength. We’ve got excellent defensive capabilities and we’ve got a tremendous offensive lineup from top to bottom. And quite possibly, our biggest strength is the character of our players. This group is a very selfless group that works hard and appreciates the coaching they get from the staff, as well as the camaraderie they get with their teammates. It’s going to be a fun year, not only because they’re excellent athletes, but more importantly they are excellent young ladies.”

Mayfield cruises to win over Hudson