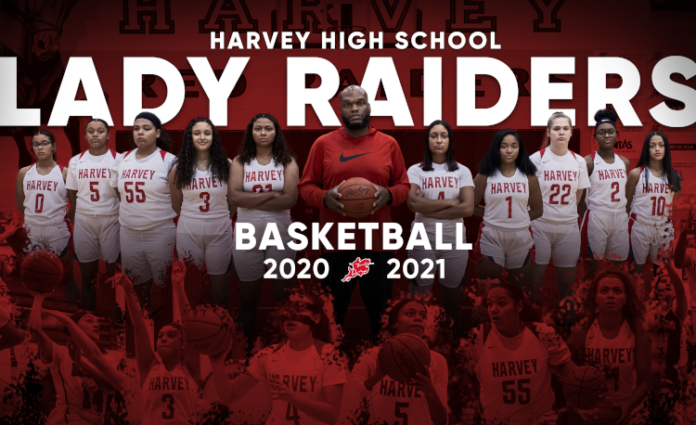 Harvey heads into the 2020-2021 season with an athletic roster ready to compete both in the Chagrin Valley Conference and in the postseason.

The Red Raiders return four starters and a host of others with varsity experience.

“I’m excited about where our program is this year,” said third-year head coach Jerimie Acree. “We had a core group work extremely hard in the offseason and I believe that their hard work will pay off this year. With four of five starters returning this year, I think we’re going to surprise a lot of teams this season.”

Acree plans to use his team’s athleticism to dictate the tempo this season.

“Our team is extremely athletic and versatile, which will allow us to put pressure on our opponents both offensively and defensively this year,” he said. “Our versatility will allow us to dictate the type of game we want to be played on any given day.”

While the Red Raiders return most of their starters from last year, the squad is relatively young.

“Although we have a lot of girls returning from last year, we still only have two seniors in our program,” Acree said. “Every coach, no matter the sport, knows that the more seniors you have, the stronger your program is on and off the court.”

Both seniors are projected to start.

Hailey Davis, a 5-foot-6 guard, and Elly Gray, a 5-foot-7 guard, both are returning starters.

“(Davis) dedicated her offseason to improving her game and becoming the best version of herself,” Acree said. “She’s stronger, more explosive and more confident coming into her last year as a Lady Raider. I’m excited to see how the season unfolds for Hailey.”

“Elly has worked extremely hard in the offseason, which will pay huge dividends for her game this season,” Acree said. “Elly’s athleticism, versatility and high motor have caught the eye of college coaches from Allegheny College and others. Elly is the ideal teammate who’s always willing to do what’s best for the program.”

She averaged 10 points, three rebounds and 1.8 steals per game.

“Tamia is special,” Acree said. “She led our team in scoring last year as a sophomore and based on the work she put in during the offseason, we expect her to be even better this year. This young lady can definitely play at the next level.”

Sophomores Lola Thomas and Ashia Robinson are projected to round out the starting lineup.

“Lola is not only a talented basketball player, but she’s also a very good softball player,” Acree said. “Lola is the facilitator of our program who communicates on the court better than anyone I’ve ever coached and has great court vision. As a freshman, this young lady made the go-ahead free throws that led to beating our crosstown rival.”

Robinson, a 5-foot-10 forward, is a returning starter. She scored 6. 9 points with 2.7 rebounds and two steals per game last season.

“Ashia is the catalyst for our team,” Acree said. “Her energy on and off the court breathes life into our players. Her length, athleticism and awareness have earned her a verbal Division I offer from the University of Arkansas at Pine Bluff. Ashia Robinson is known for disrupting the opposing team’s offense anytime she steps on the court. Look out for her.”

Depth for the Red Raiders will come from juniors Alyssa Davis, Tashira Wise and Stephanie Young and sophomores Zharia McMullen and Lidia Soto.

“(Davis) is a hybrid player for our team,” Acree said. “She’s another player that can play in or outside but can stretch the floor due to her ability to shoot the 3-ball. Tashira is one we’re depending on to come off our bench and give us valuable minutes. Her physicality and natural ball skills can catch opposing players off guard. Steph’s mid-range jumper is something that will definitely help our team this year. This young lady also brings a physical presence whenever she steps on the court.”

“I’m so excited to have (McMullen) a part of our program. Her versatility is the main strength of hers and being able to play on the block and the perimeter when needed. I love her length and athleticism as well,” Acree said. “Lidia’s lateral quickness and willingness to be a lockdown defender is what our program needs. Lidia will often be used to disrupt opposing teams’ perimeter players.”

The Red Raiders have their sights set on being in the mix for the CVC title but they also hope to achieve a team GPA of 3.0 or higher this season.

To achieve their goals, Harvey’s girls are going to have to continue to work hard and remain focused on each practice and game.