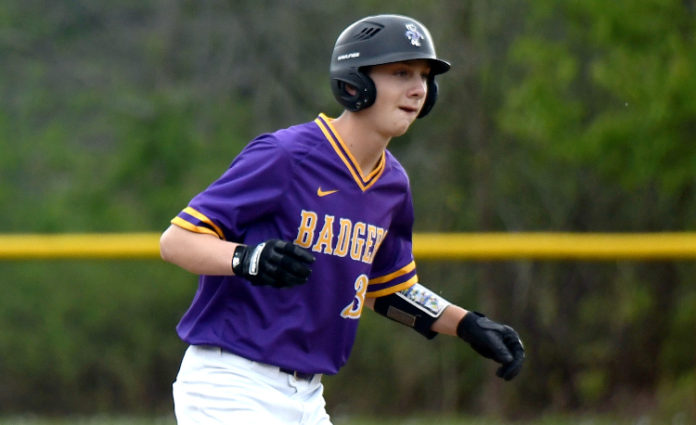 Badgers claw out 1-0 win over Springfield

Berkshire’s baseball team has had a flair for the dramatic all season long and on Monday, the Badgers claimed their third walk-off win of the season when Blake Jenkins hit a sacrifice fly in the bottom of the eighth inning to beat New Middletown Springfield in a Division III District semifinal, 1-0.

With the win, the Badgers improved to 17-11 overall and now are 5-1 in games decided by one run in the month of May.

“It’s heart-pounding to go that many innings without any offense by either team,” said Berkshire coach Nick Burzanko. “You expect somebody to push one across to put the pressure on but it was a pitcher’s duel, for sure, and a defensive battle all the way to the eighth inning. We were just able to make one more play than they did and that’s all it takes sometimes to win a ball game.”

Springfield senior pitcher Mitchell Seymour, whose fastball tops out near 90 miles per hour, struck out 13 Badgers before issuing a leadoff walk to Jack Jacobs in the bottom of the eighth. The final pitch of Jacobs’ at-bat also was the 125th for Seymour, who was forced out of the game due to reaching the maximum pitch count.

That pitching change opened the door for Berkshire’s dramatic finish.

“We knew coming in that Seymour was going to throw hard,” Burzanko said. “Lately, he had struggled to throw his off-speed pitches for strikes so we were trying to sit on fastballs, but even being prepared for it, he was blowing it by our guys. He kept us off balance. He’s the real deal. He was efficient and worked his butt off for all 125 pitches that he threw tonight. It was a great performance by him. To his credit, he did his job today. He got us out and didn’t give up a run until we got to the bullpen and we were able to make a play.”

Brian Brent then battled to a 3-2 count before he drew a walk to load the bases for Jenkins.

“In our meeting before J.T. even stepped to the plate, I brought Brian Brent in and told him we were going to sacrifice bunt and I guarantee they don’t throw to Jake Brown; they’d intentionally walk him, and that would put it on you,” Burzanko said. “Brian had a good at-bat and worked it to a full count and ended up walking to load the bases for Blake Jenkins. He was able to hit a fly ball to the left fielder and sometimes you have to trust your guys and I sent Jack. The throw was a little bit errant and he was able to touch home and we won 1-0.”

Despite Springfield managing just one hit and Berkshire three, both teams had scoring opportunities prior to Berkshire’s eighth-inning rally.

Brown hit a two-out single in the bottom of the first and Brent drew a walk but Seymour struck out the next batter to end the threat. Seymour allowed just two hits and two walks until he departed in the eighth.

A single and an error put a Tiger in scoring position in the second, and a walk and a sacrifice bunt in the fifth had Springfield in position to score again, but Bergmeier pitched his way out of both jams.

The Tigers ran themselves out of scoring opportunities in the sixth and seventh innings.

Aaron Groner reached on an error in the sixth but was caught stealing. Aaron Stallsmith then drew a leadoff walk in the seventh but Bergmeier picked him off first.

“In our scouting report, they do this hop-lead that they try to get the timing down on the pitcher to steal bases and J.T. being a lefty and being able to stand there and stare at him, he was able to see them and when they took off he could pick his leg up and step at them,” Burzanko said. “He gave his bad move and then came right back with his good move and picked the kid off. He threw it to Jack Jacobs and Jack threw a strike to Jake Brown at second base and he put the tag on.”

Ethan Mannion then reached on an error and was replaced by a pinch-runner.

Bergmeier caught him, too.

“Nine times out of 10, you tell your pitcher if they put a pinch-runner on you throw over once or twice because the guy is probably moving,” Burzanko said. “He didn’t even throw a pitch yet, he just threw it over and the kid got off just a little too much and we got him in a rundown and we tagged him out for the second out and we were able to get third out to get out of the inning unscathed. That’s J.T. just working his butt off the whole game throwing strikes and throwing to contact to let his defense work.”

Bergmeier threw just 92 pitches and faced only 24 batters in his seven innings of work.

“With it being such a close game, the adrenaline of being on the mound and competing against a good team is great,” Bergmeier said. “I knew coming into the game that we were going to be facing a great pitcher and that I needed to perform in order to keep us in the game.”

In addition to lowering his ERA to 2.08 this season, Bergmeier now has picked off five runners in 14 pitching appearances.

“I always try to keep runners close because I’m looking to help out my catcher with the throws down to second,” he said. “I have a pretty good move over to first and I tried to change up my timing and keep the runners guessing where I’m going. I knew when the pinch-runner came in that he hadn’t seen my move yet and so I thought I had a chance at him and I got it. It’s exciting to make those big plays because it gives the team momentum.”

Brown relieved Bergmeier and struck out two of the three batters he faced in the eighth.

Jacobs battled through an eight-pitch at-bat before drawing the walk that set up Bergmeier’s sacrifice bunt.

“When they brought in the reliever, coach Burzanko came over to me and told me that I needed to get the bunt down and I had been preparing for that mentally even as I was on deck not knowing if Jack would get to first,” Bergmeier said. “I had a job to do and knew it needed to happen for us to have a shot to win.”

Jenkins was 0-for-2 and had just one hit in his last 17 at-bats before delivering the game-winning sac fly.

The Badgers advanced to their seventh district championship game since the 2005 season. They’re looking for their first district title since 2016 and are 4-2 in district finals during that stretch.

To reach the regional tournament, Berkshire will have to beat Youngstown Cardinal Mooney on Wednesday. The Cardinals defeated Garrettsville Garfield in the other semifinal, 12-1.

“They hit the ball pretty well,” Burzanko said. “They’re a well-coached team, a good hitting team, and they play good defense. It’s going to be a tough task to go out and get another ‘W’ here. We’re going to enjoy this one tonight and we’ll get back to work tomorrow.”

Jacobs does it all in Berkshire win

Balanced Badgers ready to break out