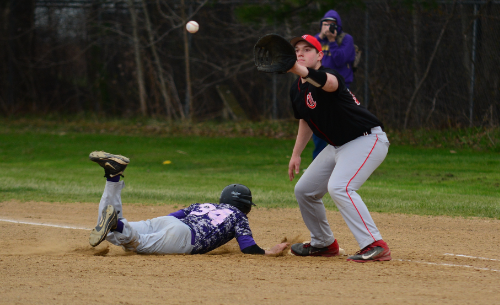 Badgers come from behind to earn season sweep over Huskies

MIDDLEFIELD—Berkshire left Cardinal on Thursday with a 10-7 win and a season sweep of their rivals but it didn’t come easily.

The Huskies jumped out to a 3-0 lead after two innings and nearly tied the game again in the sixth before the Badgers pulled away and Jarett Smetana slammed the door in the seventh.

“They’re always scrappy here,” said Berkshire coach Steve Smetana. “Last year, we had a rough seventh inning. They came all the way back and it was a close one. It was just good to get out of here with a win.”

Cardinal, which dropped to 5-10 overall and 3-5 in league play, took a 1-0 lead in the bottom of the first when Cody Purpura drew a leadoff walk and moved to second on Ryan Bruncak’s sacrifice bunt. He scored on Clark Thurling’s double.

The Huskies made it 3-0 in the second when Brendan Whitney was hit by a pitch and Logan Schultz singled. Purpura and Bruncak then hit back-to-back RBI singles.

“We went with Mitch Freeman today to start because we were kind of low on arms. Mitch throws strikes and that but our offense needed to click early,” Smetana said. “It’s one of those games where we can’t get down too deep. Mitch had a couple of bad breaks and they hit a couple of balls off of him. I had to make a change to Chapman, which was the plan all along. It was maybe a little earlier than I wanted to.”

The Badgers tied it with three runs in the top of the third and took a 4-3 lead in the fourth.

Aaron Pawlak was hit by a pitch with one out in the third and moved to third on Smetana’s double. Pawlak scored on Gordy Cossick’s ground out and Smetana scored on Sam Fisher’s single. Fisher stole two bases and scored on an overthrow.

Quentin Schultz drew a leadoff walk in the top of the fourth, stole two bases and scored on a balk.

Berkshire, which improved to 9-8, 4-1, scored four more in the fifth but the Huskies responded with four of their own in the bottom half of the inning to cut it to 8-7.

Bruncak nearly tied it when he hit a rope down the first base line but Smetana was there to end the threat.

“Ryan Bruncak hits a hard line drive and the kid jumps up and it ends up in his glove. That’s a tie ball game there if that gets in,” said Cardinal coach Brian George. “The guys had pretty good at bats overall. We had some key two-out hitting. You can’t ask for more than that.”

Berkshire added two insurance runs in the top of the seventh when Schultz drew a leadoff walk, moved to second on a sacrifice bunt and scored on Chapman’s double. Chapman then scored on Connor Dudinsky’s sacrifice fly.

“At the end there, the best part of the game I think is when we got the leadoff walk in the last inning, put down the sac and got the sacrifice fly,” Coach Smetana said. “That’s baseball and that’s what we work on every day. We executed and gave us that extra cushion and Jarett closed it out.”

Jarett Smetana struck out the side to end the game.

“We played tough,” George said. “We knew it was going to be a tough game against these guys. They come to play every day. They’re good with the stick. We knew that Smetana was going to come in and finish it. We had our plan and it was a great game. Our guys played tough. We just came up a little short at the end.”

Smetana, Cossick and Fisher each had two hits for the Badgers with Cossick and Fisher both knocking in two runs. Chapman went three innings to pick up the win and Smetana recorded a save after his two scoreless innings on the mound.

Purpura and Thurling both had three hits for the Huskies, who outhit the Badgers, 11-9.

Berkshire travels to Harvey on Monday while Cardinal plays at Cornerstone Christian Academy on Friday.