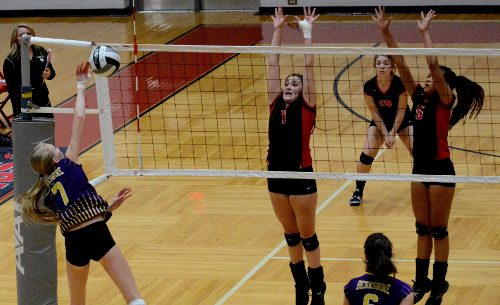 LEAVITTSBURG—Monday’s Division III district semifinal between rivals Berkshire and Cardinal was everything it was billed to be and more.

The second-seeded Badgers and sixth-seeded Huskies went toe-to-toe for five games in front of a packed house. In the end, Berkshire edged the Huskies, 3-2, and will play top-seeded Newton Falls for the district title on Wednesday.

“It was a tough loss, but I know deep down that the girls worked hard and played with heart,” said Cardinal coach Karisca Chambers. “They put up a good fight, but just fell a little short. It could have gone either way and that last set just depended on who had the momentum first and Berkshire scored the first point and ran with it. Volleyball is such a game of momentum, especially in that fifth set. I'm so proud of my team and the program at Cardinal. It's only going to keep growing and flourishing.”

Berkshire opened the match with a 25-16 win in the first set. The Huskies responded with a 25-23 decision in the second. The teams then split the third and fourth sets with identical 25-13 scores to set up the decisive fifth set.

Leading 8-5 in the fifth set, the Badgers broke it open with a six-point run that all but sealed Cardinal’s fate.

The Huskies finished 20-5 in their first year under Chambers.

“I couldn't have asked for a better first season as a head coach,” Chambers said. “Coming in, I knew it was a good program, but you never know what to expect. This was a whole new setting and experience and getting to know each of the girls was what I set out to do.”

Under Chambers, the Huskies won a third straight Chagrin Valley Conference Valley Division, splitting it with Berkshire after a comeback win at Berkshire on Oct. 8.

“We made goals at the beginning of the season and I am so pleased that we were able to meet some of those goals,” Chambers said. “Winning CVC for a third time in a row was so important to these girls and they worked together to share that moment. I will never forget the way beating Berkshire on their home court to share the CVC title felt for our team. That moment brought us closer as a unit and showed us that if we work hard and together and never give up, we can accomplish anything we set our minds to.”