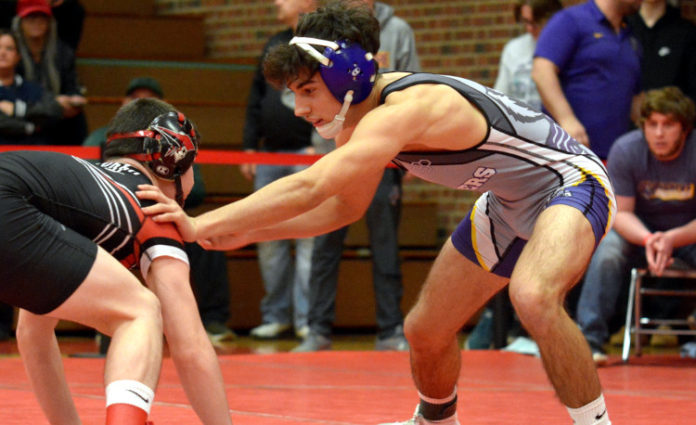 Badgers off to strong start

Berkshire is one of a handful of area teams that started the 2020-21 season on time and sixth-year head coach Adam Lange has been pleased with what he’s seen out of the Badgers.

“We have a lot of talented individuals who have good experience under their belt,” Lange said. “We are expecting our guys to step up and perform this year. Many of our wrestlers have goals of being in Columbus and competing at the state tournament and I feel if we continue to wrestle the way that we have so far, we should achieve those goals.”

Despite being short on numbers, the Badgers should fill each weight class this season but the Badgers aren’t deep and injuries or illness could hurt the team in dual meets.

At full strength, Berkshire has the potential to be very successful this winter.

“Having a team with the experience and competitiveness that we do plays a big role in team points,” Lange said. “Our guys love to pin and we constantly fight for bonus points in matches and that will help propel us to the top.”

Heiden, who will wrestle 120, was 35-16 last season with 18 pins. He placed second at the sectional tournament last season.

“Justin is looking to end his high school career with a trip down to Columbus,” Lange said. “His leg attacks and top game are his strengths to success. Justin has a lead by example mentality and has been doing great with pushing the younger wrestlers to make the next step.”

Tribuzzo, a 126-pounder, finished 28-16 last season with 14 points. He’ll be looking to make his fourth straight appearance at the district tournament with an eye on his first trip to state.

“As a three-time district qualifier, we are looking to see Josh make the next step and qualify for the state tournament his senior year,” Lange said. “Josh has the technique and quickness from his feet to take down anyone but will need to use mat wrestling to narrow the gap this year. Josh has been a great vocal leader and has been pushing the younger guys.”

Perrin, a 195-pounder, finished his junior season with a 32-16 record with 20 pins and placed second at the sectional tournament.

“J.J. has continued to grow each year that he has been in our program,” Lange said. “Last year, we thought J.J. had a great opportunity to qualify for the state tournament, however little technique and conditioning problems kept this from happening. This year J.J. has been doing a better job at pushing himself in conditioning, along with going back through film to see what mistakes he made to fix them for later matches.”

“Injuries have hampered Hunter’s last two seasons with the program. He is hoping for better luck this year and a chance to wrestle at sectionals and qualify for the district tournament. Hunter has had a great work ethic in the room and has been vocal in pushing guys to take it to the next step,” Lange said. “Tyler is in his second year of wrestling. He came out last year to stay in shape for track. He is pound for pound the strongest guy on the team and is tough as nails. Tyler provides a great work ethic in our room and is someone who will win matches he shouldn’t based on his mentality.”

Sayre will wrestle 220 this season. He was 5-10 last year with three pins.

“Aden is looking to build off of last year and qualify for the district tournament,” Lange said. “Aden is someone who we were able to wrestle at heavyweight and 220 last year. If Aden can continue to make progress he should be able to reach his goal.”

Stoddard needs just 17 wins to reach 100 for his career.

“Lucas is a gamer and never backs down from a challenge,” Lange said. “He is looking to build on last year’s season and wrestle his way to the podium at state. Lucas has gone to some offseason tournaments this year to continue to push himself. In the practice room, Lucas is a vocal leader and has continued to grow each year with his technique and skills.”

Bosher will compete at 285 this season. He was 8-22 with three pins last winter.

“This is Jeremy’s third year wrestling since coming from basketball,” Lange said. “He continues to grow each year and we are hoping that this year he can make it to the district tournament. He will need to continue to work on finding his takedown. Jeremy has been someone that wants to succeed in the sport and has been trying to learn the basics to help him succeed. We hope that Jeremy can make the next step in his progression.”

“Josh is one of the hardest workers in our room but also understands how to have fun during the process. Josh was able to keep matches close last year as a freshman but couldn’t always close out the match. This year through a small sample size, he has been able to keep his foot on the gas to close out matches. He is another wrestler that should be vying to wrestle in Columbus,” Lange said. “Johnny is looking to continue to have success from his freshman year. He was able to qualify for districts being up two weight classes. Johnny has a great mentality and will go out and compete to the best of his ability. He will need to start picking up on the little ins and outs of wrestling to start getting more continued success. We will be looking for him to take this step as the season continues.”

Hering will wrestle 106 while Kosova will see time at 126.

“Colin is undersized for a 106-pounder but has the skills to win matches. Colin was able to win his (Ohio Athletic Committee junior high) district last year in eighth grade and was a ‘Blood Round’ finisher at OAC his seventh-grade year. He will need to continue to find situations in matches that are his time to capitalize and when to back off. He will contend to make it to districts and possibly catch a few people off guard with his determination,” Lange said. “Amadeus is a first-year wrestler. With contact tracing pulling guys from our lineup, he has been tossed into the starting lineup at 126 and 132 at all three of our events this year. I’m very pleased with his progress so far this season. Amadeus has a fighter’s mentality and gives his all in each match.”

Munn is projected to wrestle 138 while Ciancibello is slotted at 170.

“Alex comes into this high school season looking to make a splash. Like his fellow teammate, Alex won his OAC district last year. Alex has started the season off with some bumps, but due to scheduling has been wrestling returning state qualifiers and projected state qualifiers across all divisions. He has been able to keep his head during these growing pains and will be vying to qualify for states this year,” Lange said. “We are looking for big things out of Maddex once he is back on the mat.”

Pringle will see time at 170 while Luoma provides depth at 195.

“Auddia has been getting better each year she has been on the team. We are hoping that this year we can get Auddia into the girls’ state wrestling tournament and see how she can compete. She has been working hard each day in the room and works hard to continue to get better,” Lange said. “Lucas comes to us with a ‘win at any cost mentality.’ This year, wrestling a returning district placer, Lucas was able to keep the match 10-5 and threw everything he knew during the match. He will win a lot of his matches based on his determination.”