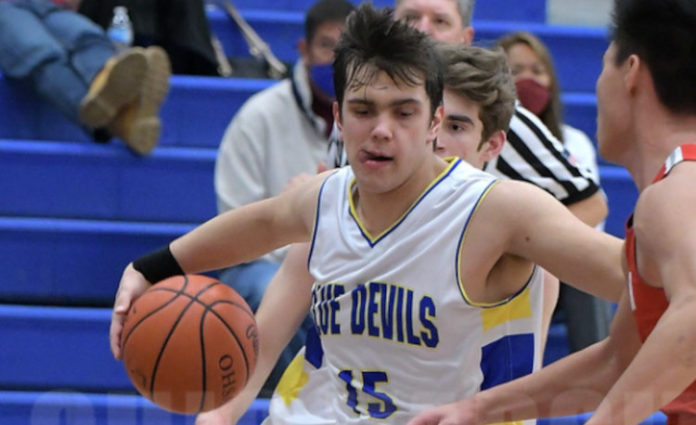 The Blue Devils, who blanked the Longhorns in the second quarter, improved to 7-5 overall and 3-1 in league play with their 54-51 victory.

“It was a very balanced night,” said Independence coach Kyle Johnson. “We had seven guys with six to nine points, which we haven’t had since I’ve been here. We were pretty patient, but we were still pretty sloppy with our turnovers and made some unforced turnovers. Fortunately, the guys were able to pull it out in the end and get the win.”

Independence held an 18-17 advantage after the first quarter but went on to outscore the Longhorns in the second, 9-0, to take a double-digit advantage into the break.

“We have a really deep team and everyone can score,” Mitrisin said. “It helps us a lot because everyone on our team can score.”

With the offense spreading the wealth, Independence’s defense stole the show in the second quarter.

“Our goal was to limit turnovers and come out strong,” Mitrisin said. “We didn’t have a good first quarter but once we stopped turning the ball over good things started happening. We also had a good defensive game.”

Independence increased its lead to 41-30 entering the fourth quarter and then held on as the Longhorns made their run.

Tyler DeSimpelare led Lutheran West with a game-high 20 points, despite the extra attention the Blue Devils paid to him.

“He’s solid,” Johnson said. “We tried to get up and play against him like we did with (Gavin) Dobbins from Open Door and just put bodies on him all night. Connor Blum did a tremendous job on him. He still had 18-20 points but we just ran bodies on him.”