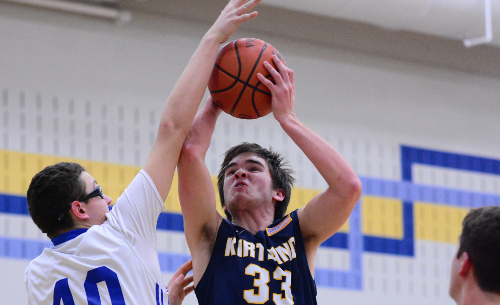 INDEPENDENCE—Rush hour traffic delayed Kirtland’s arrival at Independence High School for Tuesday’s Chagrin Valley Conference showdown with the host Blue Devils but the Hornets had little difficulty getting off to a fast start in a 65-49 win.

The Hornets racked up a season-high 42 first half points to take a double-digit lead into halftime and never let up in the second half.

“I thought we did a real nice job of setting the tempo early,” said Kirtland coach Nick Gallo. “We came with a really good first half. I thought we came out with a rhythm offensively and shot the ball well. That kind of helped us get into our press and made them a little bit uncomfortable.”

Tommy Loncar scored a team-high 13 points while Jacob Boyd added 11 and Sam Skiljan contributed with 10. Eight other Hornets scored in the game.

“It was a nice team win,” Gallo said. “It was nice to see us get some balance offensively. Across the board we had guys with six and eight. It was nice to see a lot of guys in the scorebook again. It was a good win.”

“I think we dug ourselves a hole by turning it over in the first half, I know the first quarter eight times, and then missing shots at the rim where we didn’t finish plays,” said Independence head coach Hugh McMahon. “That was on us. We had some plays to make and we didn’t make those plays.”

Kirtland set out to slow down Daniel Mathews, Independence’s leading scorer. Mathews dropped a game-high 22 but found it tough getting those open shots.

“It was full deny on him the entire game to give them a different look and make him feel uncomfortable,” Gallo said. “We went to the zone and lost him a couple times. We had guys running at him as well as we could have. In the second half I thought we did a good job of stabilizing him.”

At one point, Mathews hit back-to-back 3-pointers and Kyle Stefanski added a third to pull the Blue Devils to within 24-20 early in the second quarter. Kirtland outscored Independence by 10 to finish out the half.

Kirtland’s defense played much better in the second half as it limited the Blue Devils to just 21 points.

“We’re getting more and more prepared and comfortable in the stuff we’re running, which is making us play more efficiently on both ends of the floor,” Gallo said. “Our goal is to keep the game in the 40s all the time so that’s another good night for us defensively in the second half.”

Boyd played one of his most complete games of the season. He took shots from the perimeter but also slashed his way to the hoop on several occasions.
“I was happy to see him attack the basket,” Gallo said. “He didn’t get every foul call to the rim but him getting straight line attacks to the rim and really using his body and being physical and not settling for 3-pointers in the corner, he took one early, but I thought he did a really good job of attacking and crossing over to get to his right hand. It was good to see him get going tonight and play a really efficient game for us.”

The Hornets improved to 7-5 overall and 3-3 in the CVC. Independence dropped to 5-8 and 2-5 but its young roster continues to mature.

Independence last lettered a freshman all the way back in 1951. This season, the Blue Devils have started two and played a third ninth grader. Mathews is the only senior on the squad.

“We’ve got a lot of guys that in some other programs might be playing JV. That’s why I’m so proud of them,” McMahon said. “We came out and competed and gave the effort. We just didn’t finish plays at times. They don’t realize how close they are to turning games around like tonight and being right there at the end. We just need some people to step up and play a little tougher. Like Urban Meyer says, ‘Next man up.’ You’ve got to step up and play the game. These guys have been great as far as taking coaching at the varsity level and the competition and improving their game. I’m very proud of how much progress we have made.”

Kirtland travels to Wickliffe on Friday while the Blue Devils play at Hawken.