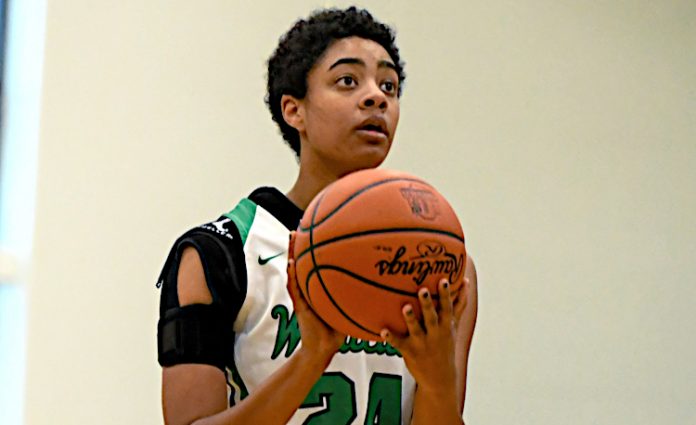 Two Wildcats scored in double figures while seven others contributed to the offensive output.

“We were pretty balanced,” said Mayfield coach Cullen Harris. “That’s our recipe for success is having a balanced effort with five kids on the floor sharing the ball.”

Mayfield jumped out to a 16-4 first-quarter lead and took a 28-9 advantage into the break.

The Wildcats outscored the Tigers in the second half, 23-20, to secure their 12th win of the season.

Uriah Jennings led the Wildcats with 11 points while Hannah Peterson finished with 10.

“It’s really important to have that team balance,” Peterson said. “It was nice to be able to see everyone score the ball. When everyone scores the ball, it makes the game smoother and makes the game more fun. Also, with tournament time right around the corner, we’re going to need more of everyone scoring, so tonight was just great practice for later down the road.”

Jennings and Peterson took advantage of their opportunities but they also set up their teammates with inside-out passing.

That set up Gabby Moore and Nav Buttar with good looks at the hoop from the perimeter and each finished with nine points. Buttar hit a game-high three 3-pointers.

“It was good to see Gabby get some open jumpers she was able to knock down, and same with Nav,” Harris said. “Uriah and Hannah did their work inside to open things up on the perimeter, but that’s our recipe for success. We try to distribute the scoring efforts to make us harder to defend.”

Olivia Williams contributed to the win with five points while Alex Duncan, Cori Marsalis, and Lauren Schmidt each finished with two. Grace Moran added one point.

While Peterson scored in double figures, it was her effort in the paint that made the biggest difference in the win.

“It’s really important to me,” she said of that role. “I’ve never been one to only care about scoring. Basketball is a team sport; I can’t win by myself and I can’t lose by myself. We’ve been told to play inside-out and that’s what I did. Being able to set up my teammates is really important to me; it’s a big part of the game that you just can’t give up.”

With the win, Mayfield improved to 12-7 overall. The Wildcats travel to Kenston on Wednesday.