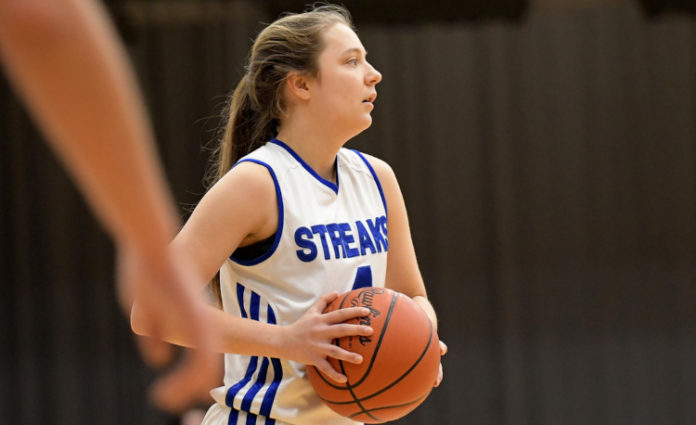 For a moment, Chloe Bancroft wasn’t thinking about what could have been if Madison started its season on time or if the Blue Streaks weren’t shut down for the two weeks prior to the playoffs.

No, with the clock ticking toward zero in a tie game at Hudson on Tuesday, all the Madison junior had on her mind was one shot; that one opportunity to end her junior season on a positive note and to generate some much-needed confidence heading into the offseason.

Bancroft accepted a pass from teammate Payton Lewanski and, without hesitation, turned to the hoop and released a high-arching shot on a perfect trajectory through the net that led to a 51-48 win.

“It feels great to end on a good note,” Bancroft said. “It’s been a crazy year with COVID and our shutdowns, so I’m thankful we were able to send our seniors out with a win.”

Madison trailed early and Hudson even held a 10-point advantage in the second half, but the Blue Streaks were determined to end the season with a win.

“We really needed that,” said Madison coach Tedd Wagner. “We talked about ending the season on a high note. You always want to end a golf round with a birdie, no matter how bad you played. I thought the first quarter, our effort was not there. We were very lethargic. We picked it up in the second quarter a little bit. We kept battling and turned it up a notch in the fourth quarter.”

The Blue Streaks trailed the Explorers after three, 38-32, but their persistence paid off.

Riley Montagner, who finished with a team-high 14 points, drained a free throw to give the Blue Streaks a 48-47 lead with just over 40 seconds remaining.

Hudson hit a late free throw to tie it at 48-48, which set up Bancroft’s game-winner.

“They were pressuring all game, but they went back to a 2-3 zone so we were going to run our zone play for Montagner, but they kind of came out in a box-and-one,” Wagner said. “We looked for Montagner but she was blanketed so we kicked it back to Bancroft. They left her open and she just nailed it.”

Madison rotated the ball until the Blue Streaks found a crease in the Hudson defense.

Lewanski had some room in the paint but the defense crashed on her as soon as she received a pass from Elizabeth Bottar. That forced her to kick the ball out to Bancroft.

“All I was thinking was, ‘It’s in,’” Bancroft said. “As soon as I touched the ball, I knew it was money. It’s definitely a boost of confidence for the off-season. I’ve been struggling with my shot this season, so to end on a game-winning 3 feels great.”

Madison bid adieu to seniors Alyssa Lavdis, Chloe Wakim, and Jenna Kadas, but the Blue Streaks do return three starters and a host of others with quality playing time.

A win in the season finale set that bunch up for an inspired offseason.

“I told the girls they’re going to have to think about this game for ninth months so do you want good memories or bad?” Wagner said. “Now, we have some good memories and we know what we’re capable of. The fourth quarter was 19-10. We’ve had quarters like that and halves like that, and a game like that against Chardon. We just have to turn it up a notch.”

Kirsten Woleben and Lewanski both contributed to the win with eight points and Bottar ad Claire Wakim each scored seven. Bancroft pitched in with five.