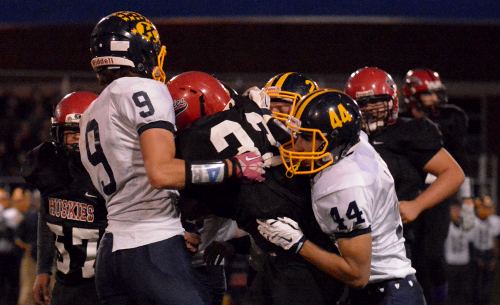 MIDDLEFIELD—Senior Joey Bates carried the football 14 times for 195 yards and scored three touchdowns—all in the first half—to lead Kirtland to a 50-13 win at Cardinal on Friday.

Bates scored on runs of 8, 78 and 37 yards. His last score came just 45 seconds into the second half and increased Kirtland’s lead to 36-7.

“We wanted to make a statement and jump on them quick,” Bates said. “The line did a great job and was able to open the holes for all of the backs very well.”

David Allchin got things going for the Hornets when he scored on a 25 yard run on the second play from scrimmage. Bates scored the next two touchdowns, both in the first quarter, to make it 21-0.

Cardinal’s Nate Peters returned a kickoff 61 yards and Cam Klepper booted the extra point to cut the Kirtland lead to 21-7.

Allchin closed out the scoring in the first quarter with a 10-yard run and Bates had the only touchdown in the second quarter.

Dylan Aquila and Gaige Ward both had short touchdown runs for the Hornets in the second half and Cardinal freshman Trey Shirkey scored on a 6-yard run in the fourth quarter in his first action since suffering a Week 1 injury.

Kirtland improved to 6-1 on the year.

“All of the guys are really starting to come together,” Bates said. “Coach always tells us that we can be a special team if we continue to grow every week, and a lot of us really take it personally and upon ourselves to continue to grow.”

The Hornets travel to Fairport Harding on Friday while the Huskies play at Hawken.