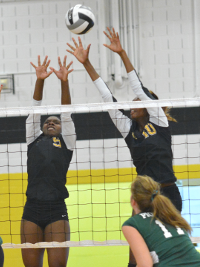 Beachwood’s volleyball team continues to raise the bar in 2014.

The Bison on Saturday opened their own Invitational with a 25-13, 25-10 sweep of John Marshall to win their 10th game of the season. That is believed to be a new school record. After wins over Western Reserve Academy and Shaker Heights, the team claimed the Bison Invitational championship for the first time in school history.

“It feels great,” said first-year Beachwood coach Sarah Schoenhagen. “It’s a great feeling but it’s even better just to see the girls and the looks on their faces and how excited they are.”

After their tournament opening win over John Marshall, the Bison opened their semifinal match with a 25-21 win over Western Reserve Academy. The Pioneers came from behind to win the second set, 26-24, but Beachwood advanced to the championship match with a 25-20 third-set win.

The Bison left nothing to chance against Shaker Heights as they cruised to 25-16 and 25-19 wins then hoisted the team trophy.

“We really wanted that trophy today,” Schoenhagen said. “Even though we were down to just seven players I think everyone did their job today. We could have had more energy but I thought overall they dealt with it well and didn’t give up.”

“I thought they played good,” Schoenhagen said. “We were down a couple girls. We were missing Jada Stevens, one of our best defensive players and all-around players. We switched up the rotation and put Allonda on the outside. Marilyn had a bigger role in the middle.”

With the three wins, Beachwood improved to 12-3 as it heads into the second half of the regular season.

Schoenhagen hopes her Bison capitalize off the momentum created by the tournament win.

“I think it means a lot,” she said. “This is the first volleyball trophy Beachwood has won and the JV was second, so we got two trophies today. The girls are happy and feeling confident. Hopefully that’s the extra little push we need to finish off the regular season.”

The Bison host Wickliffe on Tuesday and travel to Cuyahoga Heights on Wednesday.