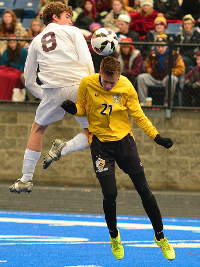 Unfortunately for the Bison, the game was played on the Gilcrest Field blue turf and the Raiders won the game on an own-goal in overtime.

“The bottom line, I told the boys, you’ve got to score goals to win games,” said Beachwood coach Brian Greene. “If you don’t score goals a mistake like this or something like that can happen.”

Beachwood, who finished the year at 14-5-2, had many opportunities to win the game in regulation but the Bison never found the back of the net.

The Bison put together a vicious attack in the final 10 minutes of regulation but Shai Yulish, who scored 30 goals this season to become Beachwood’s all-time single season scoring leader, and Asaf Roth both missed the net on several scoring tries. One shot even bounced off the upright.

“They cleared two or three balls off their own line,” Greene said. “We were all over them. We had like (10) corners and we outplayed them for 70 of the 80 minutes probably, but soccer is a cruel sport. Whoever puts the ball in the back of the net wins the game. It’s not a matter of who looks better or who players better.”

The Raiders, who advance to the state Final Four for the first time with a 17-1-2 record, ended the game with 9:41 to play in overtime when Jonah Wilson’s free kick deflected off a Beachwood defender and into the corner of the goal.

“I can’t be upset about this because we outplayed them for the majority of the game. We were just unlucky to not come out on the winning side of it. That’s just the way it is sometimes,” Greene said. “My boys fought hard. We’ll be back here next year.”

Beachwood’s 14 wins were the most in school history and the Bison finished as regional runner-ups for the second time (1984). The Bison scored 74 goals, the second most in their history, and won the Chagrin Valley Conference Metro/Valley Division title for the third straight season.

“It’s just a tremendous effort by the boys,” Greene said of the season. “I feel for them, but you need a little adversity sometimes to get better and to overcome. We need to get better, we need to get older and mature and know that we have to handle ourselves better and finish our chances.”

With all but one starter returning next season, Greene is confident this loss will inspire his players to focus on finishing and playing even more aggressively.

“I’m a big believer that you learn from experience,” he said. “This was a great experience this year. Coming out of our district is the hardest part. Getting here is just the gravy. This is a regional championship and any one of the teams that came out of our district could have done the same thing here. We just have to keep after it and stay focused and hope they have a little bit of luck and maybe we’ll be here again next year.”