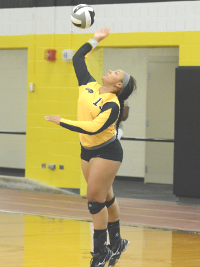 Through eight games of the 2014 season, Beachwood’s volleyball program under first year head coach Sarah Schoenhagen already has won more games than it did in all of 2013. Despite the success, the Bison still have room for improvement.

The team lost its first set at Cornerstone Christian on Monday but rallied to win the next three to improve to 6-2 overall.

“To me, it was just the energy,” Schoenhagen said. “It’s not like the first game versus the last game, even stat-wise, there wasn’t a huge difference in stats between the games. It was the energy. Once they get the energy going they play well.”

“That seems to be the story,” Schoenhagen said. “Me and coach Shaina (Bryan) tell them every single game it’s their energy. Even if you have to fake it a little bit and overdo the energy, that’s what it is. When they have a lot of positive energy and are cheering and encouraging each other they’re play level goes up. Even the first two games, they were working hard but like coach Shaina says, they weren’t playing smart.”

“She played really well today,” Schoenhagen said. “She said she hasn’t felt like she played up to her standard this year. She’s starting to get into her groove and find herself again. She’s one of our best defensive players.”

The Bison host Richmond Heights on Tuesday then travel to Independence on Thursday to play the Blue Devils, ranked No. 8 in the latest state volleyball poll.