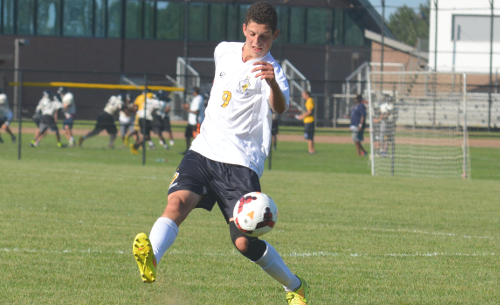 Beachwood’s soccer team rebounded from Thursday’s rivalry game loss at Orange with a 6-2 win over Cuyahoga Heights on Saturday. The game began back in August but was suspended due to lightning.

Shai Yulish led the Bison with three goals and Asaf Roth scored two. Junyoung Lee closed out the scoring for the Bison.

“We won, that’s all that matters,” said Beachwood coach Brian Greene. “It’s nice to get back on our winning ways after we lost that tight game to Orange on Thursday.”

Roth, off an assist by Yulish, gave the Bison a 1-0 lead before lightning halted play with 31:26 remaining in the first half of the Aug. 26 game.

Play resumed on Saturday and the Redskins tied it on a Mike Kozak goal.

Yulish snuck one into the net just before halftime to give the Bison a 2-1 lead. The sophomore added two more in the second half to push his season total to 17.

“He’s just scoring goals,” Greene said. “They’re finding him in open spaces and getting the ball and he’s finishing them off. That’s what you want out of a forward. He’s doing a good job of finishing off the situations that Asaf and Bogatur (Askaryan) and Vonya (Shiffman) and Junyoung get him into.”

Lee’s goal came in the first two minutes of the second half and Roth added his second just past the midway mark of the second.

Kozak scored again for the Redskins.

“Cuyahoga Heights played hard,” Greene said. “Our guys started a little slow today. We haven’t played a Saturday afternoon game in a long time. It was hard to get the boys going. Once we got going they played well.”

The Bison return to action on Tuesday when they host Harvey in a matchup of Chagrin Valley Conference rivals.