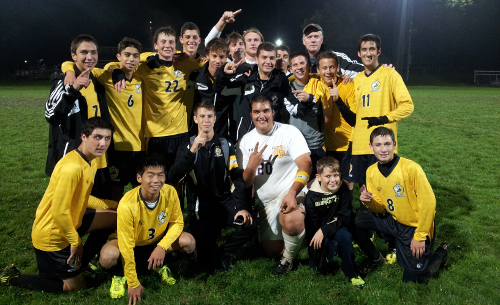 Asaf Roth and Shai Yulish each scored three goals and Matthew Stovsky and Imatar Nurko each netted one to lead the Bison to the championship-clinching win on Tuesday, but it was in the preseason when Greene realized his players were focused on bigger and better things.

“I knew something was special in the beginning of the year because we were in two-a-days and I came in on a Monday after the weekend, we practiced on Saturday, and two guys were gimping around,” Greene said. “I was like, ‘What’s the problem?’ They said, ‘We came up to run sprints on Sunday.’ They had shin splints now.”

Conference and sectional titles no longer are considered big prizes. This young group of Bison has set its sights on bigger and better things.

Already they earned the No. 1 seed in the Division III University Heights District Tournament and if all goes well they’ll win Greene his first district championship.

“That’s the personality of this team. They push each other hard. They push me hard,” Greene said. “The sky is the limit. We’ll see what happens in the tournament. You still have to win the games.”

Beachwood opens tournament play on Oct. 18 against either No. 12 Bloomfield or No. 13 Newbury. A win there would set the Bison up with a likely rematch against either No. 4 Gilmour Academy, No. 5 Wickliffe or No. 8 Cardinal, all teams Beachwood defeated earlier in the season.

“It’s always hard to beat the same team twice but that’s what we’re going to try and do,” Greene said.

Should the Bison reach the district championship game, they’ll likely see No. 2 Kirtland or No. 3 Hawken. Beachwood defeated Kirtland, 6-1, earlier this season and will play Hawken on Thursday.

The win over Berkshire, which pushed Beachwood’s three-year conference record to 19-0-1, was similar to many of the team’s wins this season.

Yulish scored three goals. Roth scored three. Stovsky and Nurko each scored one. Beachwood’s offense never looks the same from one game to the next.

Yulish leads the team with 27 goals and needs just one more to tie the school record for goals scored in a single season. But, Beachwood has other weapons.

“The thing is, it’s not just about him,” Greene said. “It’s guys getting him the ball. Guys are beating their guys and they’re feeding him. If it’s not Shai scoring it’s Asaf. If Asaf doesn’t score it’s Junyoung (Lee). If Junyoung doesn’t score it’s Bogatur (Askaryan). If Bogatur is not on Yuval (Zamir) hits them. If Yuval is not doing it, it’s Vonya (Shiffman). If Vonya isn’t doing it it’s Max (Babbush).”

Yulish closed out the CVC schedule by scoring multiple goals in every league contest.

Defensively, the Bison got stronger when Michael Dreka returned from a knee injury. Griffen Davis leads the team with 29 saves in goal. Dreka now has seven after shutting out the Badgers.

“We just take it as it comes,” Greene said. “We have Hawken on Thursday. That will be a good barometer for us. Then we have Twinsburg on Saturday, they’re another very good team. That will really test us too.”

Facebook
Twitter
Pinterest
Linkedin
Email
Print
Previous articleHuskies put it together in 7-3 win over Cuyahoga Heights
Next articleHornets hold on for 3-2 win over St. Joseph Academy