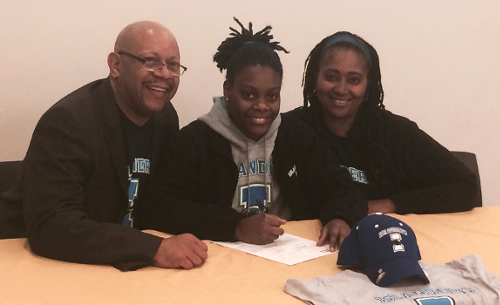 Aryana Jackson on Thursday became the third Beachwood student-athlete to sign a National Letter of Intent this week. Jackson will continue her education and basketball career at Texas A&M University-Corpus Christi.

“It was just about the feeling,” said Jackson of her decision. “I felt at home. Even though I’m going thousands of miles away, I still felt at home.”

Jackson, a guard, averaged 14.7 points, 3.0 rebounds and 2.3 steals per game last season. She shot 31-percent from 3-point range with 51 3-pointers on the season and she shot 51-percent from inside the arc on her way to earning Second Team All-Chagrin Valley Conference and third team All-Northeast Lakes District honors.

“Aryana brought another scorer/defender to our team last year and was a big part of our second straight regional final appearance,” said Beachwood coach Mike Coreno. “As a player, Aryana has the complete game. She can score inside and outside and is a great defender.”

Jackson has high expectations for her senior season at Beachwood but she’s also excited about what the future holds in college.