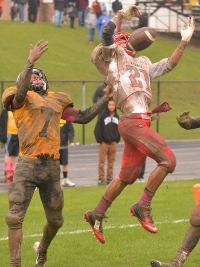 BEACHWOOD—Beachwood’s defense bent but it didn’t break in a 21-20 overtime win over Cuyahoga Heights on Saturday.

The Redskins had two opportunities to win the game but couldn’t find the end zone near the end of regulation then didn’t convert a two-point conversion attempt in overtime. It was Beachwood’s second straight overtime win over the Redskins and it clinched a second straight Chagrin Valley Conference Metro Division championship for the Bison.

“I’m just so proud of the kids,” said Beachwood coach Mike Gibbons. “The kids played awesome the whole game. They kept fighting no matter what the score was or what the situation was.”

Both teams overcame the rain, wind and mud early in the game.

Beachwood scored on its first possession when Gibbons dialed up a 78-yard touchdown run by Nate Hamilton on 3rd-and-28 from the Bison 22. Hamilton finished the game with a game-high 157 yards on 29 carries and two scores.

“That 100-percent was not me,” Gibbons said. “That was the line and Nate Hamilton. I’m just calling a play to call one because, hey, we’re going to punt here. That’s the thing about Nate though; he’s so special. No one else has a Nate Hamilton. We’re fortunate that we do have it. He is a threat any time he touches the ball.”

Max Balazs ran in the two-point conversion to put Beachwood on top, 8-0.

The Redskins responded with a 5-yard touchdown run by Grayson Thacker, who carried 37 times for 140 yards and scored all three Cuyahoga Heights touchdowns. Thacker kept the drive alive with a key nine yard run on 4th-and-1 from the Beachwood 43.

Thacker’s 1-yard touchdown run and Craig McDaniel’s two-point conversion in the second quarter left the Redskins up 14- 8 at halftime.

The Redskins drove to the Beachwood 12 on their first possession of the second half but Tyler Hines picked off a pass at the two and then Balazs and Chris Bell hooked up for a 57-yard completion that led to Hamilton’s 3-yard run that tied the game with 22 seconds left in the third quarter.

Late in the fourth, the Redskins took possession at the Beachwood 40 and drove all the way to the 28 before the turning the ball over on downs with 30 seconds left in regulation.

Beachwood struck first in overtime when Hamilton ran for 8 and 11 yards on back-to-back plays to set the Bison up for a first-and-goal from the 1. The Redskins stopped Hamilton for a loss of four on first down and no gain on second.

Balazs scored on a quarterback draw on the next play and sophomore kicker Griffin Davis drilled the extra point to put the Bison up, 21-14.

It took Cuyahoga Heights just two plays to get into the end zone.

Trey Combs ran for 19 yards on first down and Thacker punched it in on the next play to set up the game deciding two-point conversion try.

The win was the fifth straight for the Bison, who improved to 5-3 overall and 4-0 in the CVC Metro Division and kept alive their hopes of qualifying for the playoffs for a second consecutive season. The Bison host defending Division VI state champion Kirtland next Saturday.

“I’m just proud of the kids right now,” Gibbons said. “We know we still have a lot of work to do. We have obviously a tremendous challenge coming up with Kirtland but we’re right where we want to be. I’m proud of the kids because they didn’t give up. They kept fighting and we’re taking it one week at a time. We have Kirtland coming up and we’re going to focus as hard as we can to try to stop them. Obviously they’re a tremendous opponent. We’re excited about the game coming up.”

Facebook
Twitter
Pinterest
Linkedin
Email
Print
Previous articleCardinal celebrates Homecoming with 55-13 win over Fairport
Next articleVASJ on top of NCL White after win over Trinity, plenty left to do for Vikings