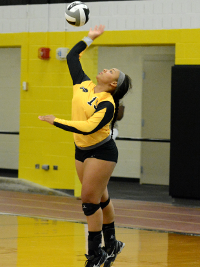 The excitement surrounding the Beachwood volleyball team is contagious.

The Bison, under first year coach Sarah Schoenhagen, swept Shaker Heights, 3-0, on Wednesday to improve to 3-1. The team’s success even carried over to the junior varsity squad, which also swept the Red Raiders.

“It feels good, especially to sweep another team,” Schoenhagen said. “The girls feel good. They were excited on the bus. Even the JV swept too, so they were all excited and singing on the bus.”

It was Beachwood’s second straight sweep after winning at Hawken on Tuesday. The back-to-back wins are the first for the Bison since the first two games of the 2013 season.

The Bison took control early with a 25-9 win in the first set.

“They just got out there and played,” Schoenhagen said. “They took care of business. They served very well and (Shaker Heights) made some errors, so that helped us to, but we just got after it.”

Shaker Heights jumped out to a comfortable lead in the second set but the Bison tied it at 19 then took control of the match with a 25-22 win.

“I think they just got comfortable and they just let them in it,” Schoenhagen said. “The girls played sloppy. Our passes were all over the place. We were down six or seven points from the beginning. I’m proud they were able to just stick with it and at some point we got back to 19-19. We were able to finish it off. It was good to see them be able to work through it and still win.”

Schoenhagen switched to a 6-2 to get more players into the game in the third set.

The Bison won that set, 25-15, to lock up their first winning streak in over a year.

“Everyone stepped up today,” Schoenhagen said. “That third game, it was good we still won because I went to a 6-2 and subbed some people in. Everyone got to play today. We changed some things up in the rotation. It was nice to see them pull it out.”

Valisha Watkins continued to dominate on the court. She tied Tamarea Townes with a team high 4 kills and also led the Bison with 11 digs.

Jaelyn Pounds recorded a team high 8 assists and three players tied for the team lead in blocks with 2.