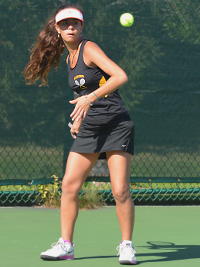 Beachwood’s schedule hasn’t done the Bison any favors but head coach David Cole wouldn’t have it any other way. Cole’s focus is to prepare the Bison for the postseason challenge and playing tough competition throughout the season is the best way to set the team up for success.

On Thursday, the Bison defeated Shaker Heights, 4-1, to improve their record to 5-7.

“It’s a good win,” Cole said. “We’re happy with that. It was a little cold so that was a little bit of an adjustment for them. We were the better team today. We’ve had a tough schedule so it was good to get a win against a much bigger school.”

“She had a great first set and then kind of cruised in the second set,” Cole said. “She came out of the box fast.”

“I thought she played what was their best player,” he said. “I was happy with the way she competed.”

“I was very happy with her; she played a tough match,” Cole said. “We talked about her playing with focus, good energy and footwork. She did that and it paid off.”

Erica Gross and Gabbi Rodriguez had little trouble at first doubles. They won 6-0 and 6-3. Maya Peleg and Jessica Tall won at second doubles, 6-4, 6-2.

“They really cruised,” Cole said of his doubles teams. “I thought their second doubles team was better than their first. Maya had a little bit of a slow start but they found a way to win that first set and then cruised in the second set.”

The Bison play Laurel on Friday and Hathaway Brown on Tuesday.

“We’re looking to get ready for our sectional, which is in about two weeks,” Cole said. “We’re going to continue to play a tough schedule and get the girls ready for a competitive sectional.”