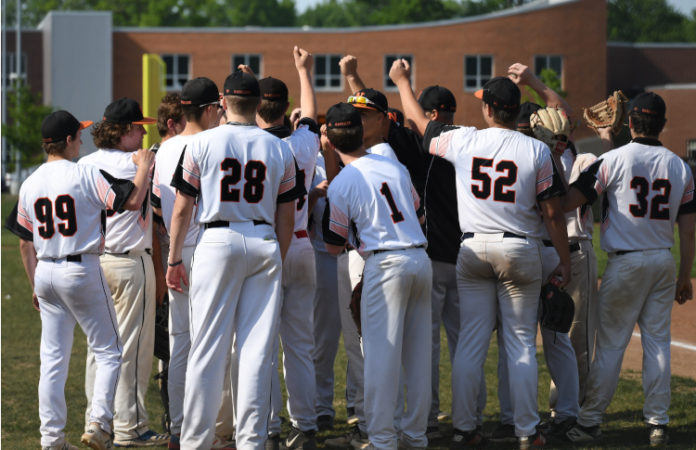 North senior Mike Beckman stood on the mound prior to the Rangers’ 10-4 Senior Night win over visiting VASJ on Monday more nervous than he’s ever been.

Beckman, who underwent Tommy John surgery in October, was making his first start since May 11, 2019. COVID canceled his junior season and the arm surgery robbed him of playing his senior year.

His mind raced as he prepared to throw a pitch for the first time in over two years.

“There was so much going through my mind,” Beckman said. “At first, I was telling myself, ‘Don’t be nervous, you have done this before,’ but that didn’t help. When I got on the mound, my only goal was to not walk the batter and I’m glad it didn’t happen. I knew all my friends in the stands and on the field would make me feel at home and they did.”

He needed just three pitches to strike out the only batter he’d face.

“When I got the strikeout, I was smiling ear to ear,” he said. “It felt great to feel like what it could have been if I were to play. Also, the cheering in the student section made it all even better. All my teammates, coaches, and even the other team’s coach were congratulating me.”

Beckman’s physical therapist gave him the OK to pitch in the game, provided he threw to just one batter at only 75-percent of his maximum effort.

Of course, that was a sliding scale.

“That was the first time he has played all year and his physical therapist said he could throw to one batter at 75-percent and I think he threw about 110-percent,” said North coach Kyle Stahlberg. “It was a cool moment for him and he was really excited to get out there and pitch. It was so awesome to see him out there, but it was also kind of painful for everyone just watching how good he is and how much better he would have made us this year.”

Watching from the dugout was the hardest part of the season for Beckman.

“Ever since I hurt my arm, I have had to watch practices without doing anything and without playing games,” Beckman said. “It was really hard knowing this is my senior season and not being able to play, especially, on the close games like Mayfield where we lost by just one run.”

Beckman’s return to the diamond inspired his teammates to finish their season on a winning note.

The Rangers started the year with a 10-game win streak but lost 11 of their next 16 games and entered Monday’s season finale with a 15-11 record.

Beckman’s leadoff double in the top of the second added an exclamation point to his return.

“The double was honestly something I didn’t think would happen,” he said. “I have never been that good of a hitter, so when I hit it down that line and got a standup double, that just made the night 10-times better.”

John Lanning contributed to the win with three hits, and Nate Stuck and Owen Hopper each finished the game with two. Chris Molica led the Rangers with three RBI.

North threw eight different pitchers, giving each senior an opportunity to throw a final pitch, but Beckman was credited with the win.

“It was awesome,” Stahlberg said. “I think more so than winning, it was just a great time for those guys to be together one last time. A lot of them have played together since they were 10-11 years old, so it was fun for them to get out there one last time and be together regardless of the result. Obviously, we were happy to get the win but it was fun just being out there together.”

North rallies for win over Brush