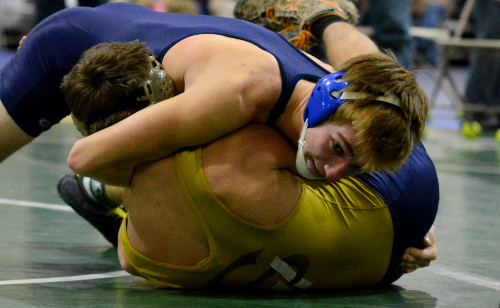 INDEPENDENDENCE—A new format to the North Coast Classic limited Independence to just one wrestler in the championship round of the tournament but it didn’t diminish the effort of the Blue Devils during the two-day event.

“I thought we fought really well,” said Independence coach Ken DeAngelis. “I thought our young kids didn’t look overmatched and our upperclassmen, our experienced kids, are starting to find their style. Overall, it was a positive experience. It was a grind, no doubt about it.”

On Friday, wrestlers competed in up to five matches and added two more on Saturday. The top two wrestlers in each of eight pools per weight class advanced to the championship round.

Independence finished 23rd overall with 130 points. Greensburg (Penn.) Salem won the tournament with 413 points while Trinity (Penn.) was second with 335 and Akron Copley was third with 318.

Benos opened went 4-0 on Friday with a pin and two major decisions. He recorded a 13-second pin in the first round on Saturday then won by forfeit to improve to 6-0 heading into the championship round.

He lost 4-2 in overtime to South Moreland’s Evan Myers, who went on to win the 145-pound championship. Benos then dropped back-to-back decisions to finish sixth.

“The kid that won it from South Moreland, he’s a Pennsylvania state qualifier and was a match away from placing at states last year,” DeAngelis said. “That was the best match Drew wrestled and it told me Drew can wrestle a long way this season. He lost in overtime and was a few inches away from a takedown at the edge of the mat and that kid goes on to win the tournament. That was a good lesson for Drew. He knows it’s important in a tough match like that to let it go, win or lose, and get ready for the next match. That was a good lesson for him.”

“He’s wrestled a long time and he has a lot of matches under his belt but it’s a big step going from junior high to high school and he’s learning how to wrestle in high school,” DeAngelis said. “He’s starting to win some of those tough matches.”

Corsi, a freshman, finished 2-3 overall at 120, but forfeited his final two matches of the tournament after suffering an injury on Friday. In matches wrestled, he won two and lost one.

He recorded two wins in the tournament.

“Kyle wrestled well on Friday,” DeAngelis said. “He didn’t seem overmatched. He looked good and scrambles nice. He’s always in good position. He went toe-to-toe with some tough kids but he tweaked his shoulder a little bit and we didn’t wrestle him on Saturday. He’s another freshman who is competing every day.”

Mroczynski, a senior, finished 4-3 at 138 pounds. He opened the tournament with a 16-second pin of St. Vincent-St. Mary’s Carl Fagerstrom then lost three straight matches. He finished with three consecutive wins.

“Matt wrestled well,” DeAngelis said. “He’s figuring out his style. He lost a tough match to a Perry kid after we beat him at (the league meet) last year. It was just contradicting styles. We couldn’t get into our offense and he got into his. Then we wrestled a kid from Valley Forge and Matt is starting to realize when he dictates the ties and action on his feet he’s doing pretty well. He came out of it learning something that will help us down the road.”

“That heavyweight class, there were some hammers out there,” DeAngelis said. “There were some tough, big kids but he did a nice job and got a couple pins. Working with (former Independence heavyweight) Paul Deely has really been helping him.”

Sophomore Nick Mroczynski finished 3-3 at 160 with two pins and a technical fall.

“He found out that at 160 pounds there are some horses out there,” DeAngelis said. “He ran into a couple really tough wrestlers. He had a tough match Saturday morning in the first round and came back and wrestled well. He’s just learning to bounce back from adversity and he did nice job of that.”