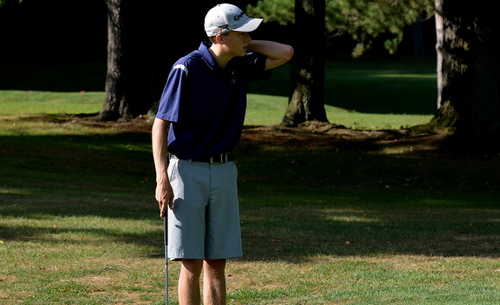 “For Brian and Danny, today's victory is bittersweet,” said Kirtland coach Greg Cosimi. “It was the last match of their senior year.”

“Brian has been such a huge part of the team since his sophomore year,” Cosimi said. “On Brian's list of accomplishments are CVC Honorable Mention, CVC Second and CVC First Team honors. Probably the most impressive is he is a two-time District qualifier, and he's playing well enough that we could make it three.”

Beres plans to ride the momentum into the post-season.

"It feels great to finish on a high note and play well in my final home match," he said. "I've been playing some solid golf as of late and that's exactly what you want going into sectionals."

Michael Schnur shot 41 for the Hornets while Adam Mueller and Jack Dever both finished with 46.

Danny Knippenberg led the Huskies with a 47. Alex Almy shot 50, Tyler Carroll carded a 51 and Gino Argento rounded out the top four with a 52.

Both the Hornets and Huskies open sectional play on Monday.