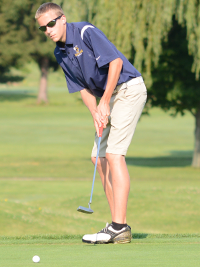 Heading into Tuesday’s key Chagrin Valley Conference matchup with Independence, Kirtland’s golf team gained some momentum and experience in a 175-186 win over Cuyahoga Heights on Monday at Astorhurst Country Club, the same course the Hornets will play against Independence.

Brian Beres led Kirtland with a 41 and Michael Schnur was one stroke behind with a 42. Michael Johnson and Daniel Heimsoth both shot 46 for the Hornets.

“Obviously we’d like to be a little bit lower going into (Tuesday’s) match with Independence,” said Kirtland coach Greg Cosimi. “We know we have to play a few strokes better because Independence is a pretty good team, but I’m pleased.”

Beres opened the season with an 82 at the CVC preseason tournament then played a couple of uncharacteristic rounds. After Monday’s match, Cosimi is confident Beres has returned to form.

“He’s been solid for us,” Cosimi said. “He had two scores that aren’t indicative of his score level. I’m glad he’s back on his upward swing and shooting in the low 40’s.”

Schnur has played well all season as Kirtland’s No. 1 golfer, even though he blew up on one hole.

“He’s our freshman 1-man and he’s leading the team,” Cosimi said. “He had a 9 on his scorecard and bounced right back with a birdie, a 3 on a par 4. It was impressive to see that kind of maturity out of a freshman.”

Johnson continues to play consistently and Cosimi was pleasantly surprised by Heimsoth’s performance after finally earning a shot to play at the varsity level.

“Danny Heimsoth was actually in a playoff to see if he’d be on varsity and to have him come out and score in a match is a great confidence booster for him and a testament to how hard he’s been working on his golf game. He’s hitting a lot of smart shots as opposed to risky ones,” Cosimi said. “Michael Johnson has been playing pretty consistently for us. His score was a little higher than he would have liked but I think he hit the ball solidly.”

Cosimi likes where his team is at heading into today’s crucial match against the Blue Devils.