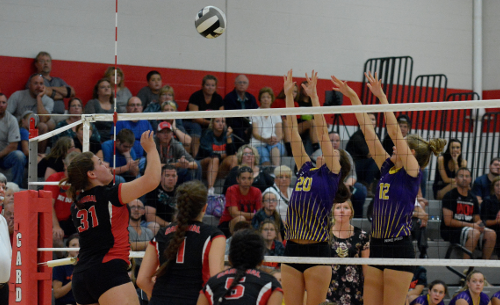 Cardinal dominated Berkshire over the past two seasons but after the Badgers edged the Huskies, 3-1, on Thursday it’s safe to say the rivalry has been renewed.

As expected, Berkshire’s Sydney Mighton and McKenna Tucek led the Badgers with 20 and 14 kills, respectively.

The Huskies tried to counter their powerful attack by shifting their block to take away the outside. The Badgers made them pay by hitting the middle.

“We actually planned for those two to be their top hitters,” Chambers said. “We worked on bringing our block in to take away the line and as soon as we did that they would hit across. They did a nice job of making our block move and they hit over the top of the block because they can jump.”

Berkshire (7-1 overall and 4-0 in the Chagrin Valley Conference) took a 23-17 lead in the opening set before the Huskies rallied behind the serving of Jordyn Schultz to pull to within 24-23. The Badgers finished off that set then broke open a 3-3 tie in the second set by scoring 15 of the next 18 points.

The Huskies never recovered in that game.

“It’s always hard playing Berkshire for the first time because of the emotions and because it’s a big rivalry game,” Chambers said. “They did exactly what we worked on except in the second game I think they got into a rut and it was hard for them to dig themselves out and what it got to eight and 10 points at that point it was very hard for them to scratch their way out because it was such a deep hole.”

At that point, momentum belonged to the Badgers but it quickly evened out after the Huskies jumped out to a 7-1 lead in the third set and never looked back in pulling to within 2-1 of the Badgers.

The fourth game was as close as the first and included five lead changes.

“They fought,” Chambers said. “I have to give that to my team. They didn’t just roll over and let Berkshire walk all over them.”

The Huskies will compete in the Chardon Tournament on Saturday. Game 2 of the Cardinal-Berkshire series will be played at Berkshire on Oct. 8.