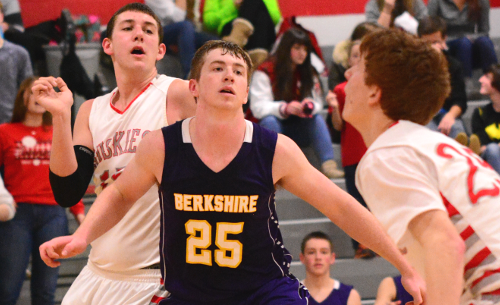 None of that mattered as the Huskies played an inspired game but came up short in the fourth quarter as the Badgers used a 15-3 run to pull away from Cardinal.

“It gets to be a little tough when we compete for three quarters and then the fourth quarter, like I said before, having a small bench kind of bites you in the butt,” said Cardinal coach Jon Cummins. “We run a lot in practice, a lot, but with seven guys I just have enough confidence in those guys to get things done and they competed. That’s what I wanted to do is compete the whole game and we did that.”

The Huskies rallied in the third quarter as Cody Hunt and Craig Kaser both hit 3-pointers and Jake Francis scored four of his team-high 15 points to tie the game at 32 heading into the final eight minutes.

“I’m still not happy with losing but we’re moving in the right direction,” Cummins said. “Unfortunately we’re getting toward the end of the season. We need to do this after the first three or four games.”

Despite a six-game skid, the Huskies are trending up.

Cardinal played both Beachwood and Kirtland tough until fading down the stretch and Friday’s game against the Badgers was much closer than the 54-32 loss the Huskies suffered at Berkshire back in December.

Sam Fisher hit three 3-pointers in the first quarter to get Berkshire off to the quick start. He added another in the third then scored five points in the fourth quarter to finish tied with teammate Jarett Smetana with a game-high 17 points.

“He did a great job to even things out for them,” Cummins said of Fisher. “That gave them the inside out with Fisher and Smetana. They’re a good team and they’re going to get better.”

Cummins installed several new offensive sets earlier in the week to combat the 2-3 zone he expected to see from the Badgers. His strategy paid off and his players executed the new plays flawlessly, allowing the Huskies to climb back into the game.

Berkshire countered by going to a man defense in the fourth quarter. That helped the Badgers to hold off their rivals.

“We got good looks and made them or got a good shot attempt at the basket,” Cummins said. “That’s one of the reasons they went to man in the fourth quarter, which was a good move on his part because we were tired and they could put more pressure on my guys instead of letting them stand out there.”

Cardinal plays at Wickliffe on Tuesday.