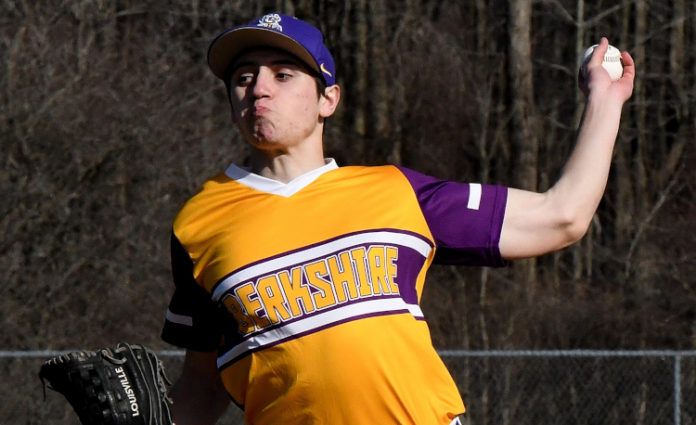 J.T. Bergmeier pitched a one-hit shutout and eight different Berkshire players recorded a hit in a 13-0 conference win at Crestwood on Monday.

Crestwood had runners in scoring position in both the second and third innings but Bergmeier struck out two batters in each frame to maintain his shutout.

“J.T. came and threw well again,” said Berkshire coach Nick Burzanko. “He struggled from time to time with location but buckled down and worked through some tougher at-bats. He kept guys off balance and made pitches when he needed to and let his defense work behind him.”

With Bergmeier locked in on the hill, the Badger offense went to work in the second.

Berkshire scored five runs on five hits, including an Evan McDermott RBI double, to take a 5-0 lead over the Red Devils.

The Badgers added four more runs in the third and three in the fourth to push their lead to 12-0. They closed out the scoring with a run in the fifth and Bergmeier shut down the Red Devils in the bottom of the fifth to invoke the run rule.

“Our guys are having great approaches at the plate and hitting the ball to all fields,” Burzanko said. “Guys are simply doing the little things in the box and moving the baseball and that allows us to be aggressive on the base paths and results in runs and keeping pressure on a defense.”

Max Janssen was 4-for-4 with four RBI and Jack Jacobs and Bergmeier both finished with two hits. Blake Jenkins had a hit and knocked in three runs. Brian Brent, Chris Groudle, McDermott, and Garrett Bosse each finished with one hit for the Badgers.

“It’s always nice to have different guys lead the lineup to a win,” Burzanko said. “Guys pick up each other and aren’t worried about who gets the honors. They are just worried about competing and getting a win.”

Badgers clutch up in doubleheader win