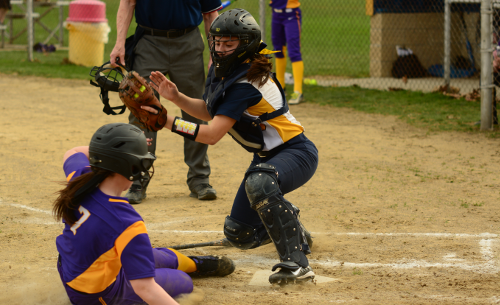 With just two returning starters from a team that won back-to-back Chagrin Valley Conference Valley Division titles and finished a perfect 8-0 in league play last season, the Kirtland Hornets find themselves in a rebuilding year.

“It’s always the little things that make the difference at the varsity level,” said Kirtland coach Tony Scibelli. “Give Berkshire all the credit, they had some really nice hits, especially in the first couple of innings. They hit the ball hard. We just need to focus on the little things and I think that will get us over the hump.”

Berkshire pounded out seven hits and scored runs in bunches. The Badgers scored three in the second and two more in the third to take a 5-0 lead over the Hornets.

Meanwhile, the Hornets struggled to get the clutch hit with runners on base. They stranded a pair of runners in the second and left the bases loaded in the third.

Cameron Garcia singled to start the Hornets’ fourth. She stole second and scored on a throwing error.

Berkshire scored two runs in both the fifth and sixth innings before the game was called in the top of the seventh due to rain.

“We just have to keep focusing on our form and our timing, just hoping to get a little better every day,” Scibelli said. “We want more than just making contact. We want to make contact on a pitch that we can drive. Right now we’re just not at that level yet.”

Garcia finished 1-for-2 with two stolen bases and a walk while Samantha Achauer and Olivia Mancisio both were 2-for-3.

“I thought Hallie (Ward) did a nice job behind the plate and our slappers were pretty effective in doing their small ball routine,” Scibelli said. “We just have a lot of growing to do. Again, I said early on, we have to learn to become varsity athletes. Part of being a varsity athlete is being focused, being intense and being competitive.”