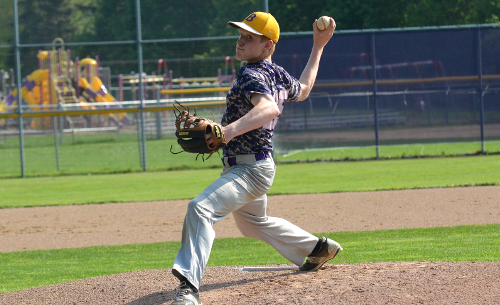 Forget that Berkshire defeated Pymatuning Valley, 19-0, in a regular season game back on March 31. In the playoffs, one bounce or fielding error could be all the difference in a team advancing or ending its season.

On Tuesday, the third-seeded Badgers got the bounces and defeated the second-seeded Lakers, 3-2.

“It was definitely closer,” said Berkshire coach Steve Smetana. “You need to play in big games and be able to execute and win in tight games, especially in the playoffs. I preached all years it’s going to come down to a bunt play and getting a bunt down and those things that make all the difference. Good base running or bad base running can lose you a game when it comes to the playoffs. Tonight we did enough.”

Berkshire, which improved to 15-9 overall, scored one run in the first inning and two in the third then held off the Lakers down the stretch to win the sectional championship. The Badgers advanced to the Euclid District tournament where they will face a familiar foe in Chagrin Valley Conference Valley Division rival Kirtland. The two teams split the regular season series and shared the conference title.

Jarett Smetana started Berkshire’s first inning rally when he drew a two-out walk. Gordy Cossick, who finished the game 2-for-3, then singled to make it 1-0.

“Gordy started us off in the first inning,” Coach Smetana said. “Jarett earned a walk with two outs and Gordy hit one in the left center gap and scored Jarett from first. That really started us off.”

Pymatuning Valley tied it in the bottom half of the inning when the Lakers capitalized on two walks and an error.

Luke Byler, who finished 2-for-4, singled to start the Berkshire third. Connor Dudinsky then singled to right and Byler scored when the ball took a favorable hop over the right fielder’s head.

“Connor had a nice hit,” Smetana said. “It was a single with a two-base error. He hit it really hard and the guy misplayed it but Connor hit it so hard it just shot right past him.”

Dudinsky scored on Aaron Pawlak’s sacrifice fly to push the Badgers’ lead to 3-1.

Will Blechschmid settled down after his first inning struggles to retire nine of the next 12 Lakers he faced.

Back-to-back walks and a single loaded the bases for the Lakers with one out in the bottom of the fifth. Jarett Smetana relieved Blechschmid and struck out two of the three batters he faced. The other reached on an error that cut Berkshire’s lead to 3-2.

“A huge part of (the win) was Will Blechschmid kept us there,” Smetana said. “He didn’t have his stuff tonight–he walked five guys in four innings with only one strike out–but he kept us in the game. When we got in a jam in the fifth Jarett came in and struck out the side to keep it at 3-2. He gave up a jam shot hit that scored a run with no outs but then he struck out the side and shut them down.”

Berkshire had its opportunities to add some insurance runs in the final three innings of the game. The Badgers loaded the bases in the fifth and the sixth and had two runners on in the seventh but couldn’t push across another run.

“We had one inning with three guys who struck out looking and the last one was bases loaded,” Smetana said. “We can’t have that but for the most part we did enough to win.”

Jarett Smetana and Sam Fisher also had hits for the Badgers.