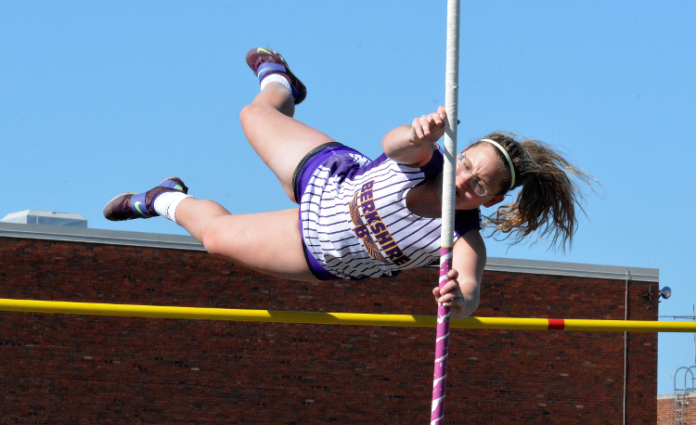 Berkshire sophomore Dana Shale is in just her second season as a pole vaulter but already she has tied a 14-year old school record.

Shale cleared 8-feet, 6-inches to finish third on Friday at the Aurora Greenmen Invitational, tying the school mark set by Danielle Peters in 2005 and besting her own personal best of 8-feet set a week ago at the East Canton Invitational.

“It was one of the most exciting accomplishments in high school so far, especially with all of the work I have been putting into pole vault for the last year,” Shale said.

Shale tied the mark on her fifth attempt.

She missed her first attempt at 7-feet then cleared that mark and soared over the 7-feet, 6-inch and 8-foot heights. It took just one attempt to clear the 8-foot, 6-inch mark.

“The biggest challenges I face are controlling my nerves and making sure my steps are right,” she said. “I overcome my nerves by taking breaths, telling myself I can do this, and listening to Coach (David) Kindall, who keeps me calm. I overcome my concern of my steps being right by focusing and doing repetitions.”

Shale missed both attempts at 9-feet but she hopes to clear that mark in the near future.

“Now that I have tied the school record, I believe in myself and know I can set a new record for Berkshire,” she said. “It makes me believe in myself even more and that any height is achievable with hard work and dedication.”

Several other Badgers finished among the top eight at the meet.

“I was very happy to place fourth today in both shot and disc,” Schafer said. “It feels good to be able to compete against bigger schools and show that athletes at smaller schools are just as competitive.”

Schafer’s is nearing in on her goals and Friday’s meet gave her the confidence she’ll need to hit those marks this season.

“I was pleased with fourth place, but my goal is to throw over 100 feet in discus and 30 feet in shot put and I haven’t quite achieved that yet. Placing fourth in a meet with such competitive teams gives me confidence that I will have success throughout the remainder of the season.”

The girls’ 4×100-meter relay team of Alyssa Wolfe, Allie Barcikoski, Morgan Scott and Kaylee Polewchak finished sixth in 55.86 and that same group also placed fifth in the 4×200 with a time of 2:00.32.