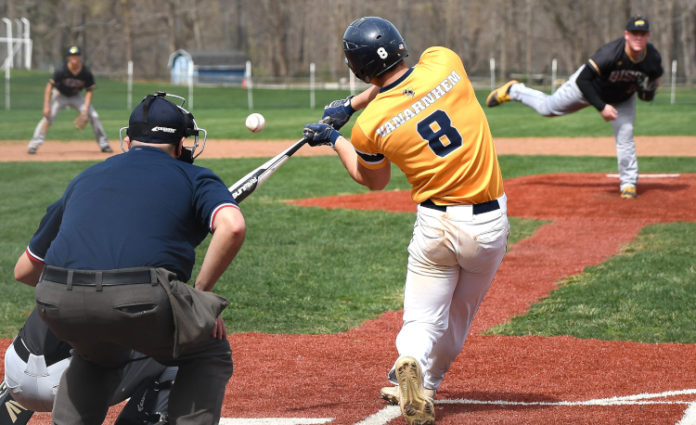 Anything that could go wrong did go wrong for the Kirtland baseball team before an eight-run fourth inning helped the Hornets beat visiting Beachwood on Saturday, 10-7.

With the win, the Hornets improved to 7-2 on the year and extended their winning streak to five games.

“I told them before the fourth inning we’ve got to make a move now,” said Kirtland coach Luke Smrdel. “We were completely flat, the bench had to get up and about, and we just had to get involved in this game. We did what we needed to do there in the fourth and on.”

Beachwood took advantage of a few Kirtland miscues to take a 3-0 lead in the top of the first inning.

A leadoff walk and a hit batsman put runners at first and second but Pierce Boyd struck out the next two Bison hitters but a single and an error cleared the bases.

The Hornets got one run back in the bottom of the inning when Anthony DeMarco doubled and scored on Boyd’s groundout.

Beachwood added a fourth run in the second inning on a pair of dropped third strikes and a single, but again the Hornets responded to pull to within 4-2.

The Bison scored one run in the third and two in the fourth on just one hit.

Beachwood drew three walks and had another hit batsman to go along with a Kirtland error.

Mason Rus took over on the mound for Boyd, who pitched 3 2/3 innings in earning a no-decision. Just two of the seven runs Boyd allowed were earned and he struck out six.

Rus pitched a scoreless 3 1/3 innings to pick up the win. He allowed three hits and struck out one.

Kirtland went to work in the bottom of the fourth.

Danny Davidson followed up Sullivan’s triple with a walk and he stole second to put runners and second and third with no outs.

VanArnhem hit a 2-2 count over the fence in right-center to cut Beachwood’s lead to 7-6.

“Gage had a big triple there too to get the momentum going and that home run really got us back in the game,” Smrdel said. “Reese is tearing the cover off the ball right now. He’s locked in right now. Every time he goes up to the plate he’s getting the job done. It’s great to see him locked in so early in the season.”

VanArnhem is now batting .500 on the season with five doubles and a home run. He has multiple hits in seven of Kirtland’s nine games.

Entering the season, VanArnhem had accumulated just 13 hits and 13 runs batted in during his high school career. He already has 18 hits with 13 RBI this season and now he has his first career home run.

“I had two strikes on me and just tried to put the ball in play,” he said. “I was anticipating an off-speed pitch down in the count and I stayed back on the pitch and drove it. I was sprinting out of the box when I realized the umpires were signaling it was a home run. Having all my teammates greet me at the dugout was great and right then we had a huge moment shift in the game. As a team, we took complete advantage of that putting up another five combined runs.”

DeMarco then doubled and Mason Sullivan singled. DeMarco scored on a Rus groundout to tie the game and Jonathan Withrow singled home Sullivan go give the Hornets their first lead, 8-7. Spencer walked and Knaak singled home two runs to close out the scoring.

“It definitely was a complete team effort as we batted all the way through our lineup with guys finding ways to get on base,” VanArnhem said. “As a team, we started the game slower than we would have liked. Coach Smrdel kept encouraging us as there was a lot of game left to be played in front of us. We stayed positive knowing we have the skills and talent to make a comeback.”

VanArnhem, DeMarco, Mason Sullivan, and Gage Sullivan each collected two hits for the Hornets. DeMarco turned both of his hits into doubles and VanArnhem lead the team with four RBI.

Four Hornets score in double figures in win over Wickliffe