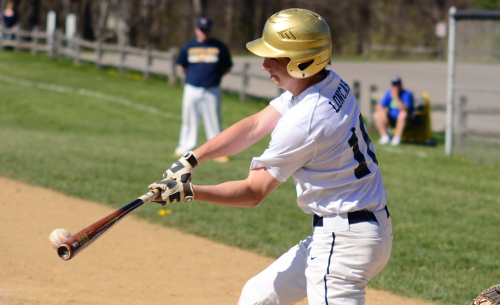 The Hornets added single runs in the third and fourth innings to finish off the Skippers, 11-0, in a five-inning contest that took just one hour to play.

“We got off to a little slow start in the first inning but had a big second inning,” said Kirtland coach Luke Smrdel. “Fairport definitely made a few mistakes and we took advantage then we started hitting the ball. We had some very good approaches at the plate.”

The quick game helped the Hornets avoid the rain and kept them in a first place tie with Berkshire for the CVC title. The Hornets improved to 15-7 overall and 6-1 in conference play.

Jacob Boyd was hit by a pitch with one out to start the big second inning. Vinny Matticoli then reached base on an error with two outs and Andrew Hutton singled to make it 1-0. Brendan Williamson then drew a walk to load the bases.

Back-to-back walks by David Allchin and Palmer Capretta made it 3-0 and Anthony Fortuna’s double cleared the bases. Matthew Finkler, Boyd and Owen Loncar followed up that big hit with three straight singles to make it 9-0.

“We only had eight hits but it was a team effort,” Smrdel said. “We played great defense and had great hitting. It was a great day despite the rain.”

With Finkler on the mound, the Hornets cruised to the five-inning win. He struck out four and allowed just one hit.

A win at Fairport on Tuesday will clinch a share of the CVC title for the Hornets.