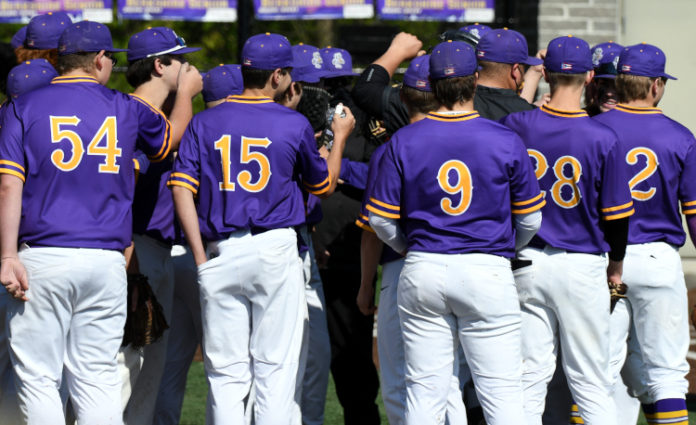 An eight-running inning led Berkshire to an 8-3 win over visiting Liberty in a Division III sectional championship on Wednesday.

The Badgers led 2-0 early and then had to play from behind after the Leopards scored three runs in the third. Berkshire plated eight runs in the bottom of the fifth to close out the scoring.

“I am very pleased with our guys’ effort and the energy today,” said Berkshire coach Nick Burzanko. “We jumped out early and the inning they scored it was more self-inflicted than anything to result in runs for them. Once our guys settled in and played the way they know they are capable of, we looked very good.”

Jack Jacobs drew a leadoff walk in the bottom of the first and scored on Jake Brown’s double and Garrett Bosse reached on an error in the second and made it 2-0 when he scored on a Jacobs single.

Despite their early success, the Badgers left runners on base in three of the first four innings.

“It felt like we were a hit away early in the game and those first two innings, we had some guys in scoring position and just needed one hit and didn’t get it,” Burzanko said.

Starting pitcher J.T. Bergmeier got into a jam in the third.

With one out, the Leopards collected two singles and a walk. They pushed home three runs with the help of an error and a wild pitch.

“In that third inning, J.T. was struggling to throw strikes, which is uncommon for him, and he got a little frustrated and flustered and then we had an error that led to two runs crossing to tie it up and then loaded the bases by not making them earn bags,” Burzanko said. “We had to go to Brown early and he wasn’t ready to go at that point, but he settled in and dealt again for us.”

Brown allowed just one hit and struck out eight in 4 1/3 scoreless innings of work to earn the pitching victory.

With the Leopard bats quieted, the Badgers went to work on offense.

Bergmeier and Brown hit back-to-back singles to open the Berkshire fifth and Brian Brent tied the game with an RBI double.

Brown scored and Brent moved up a base on a passed ball and Blake Jenkins reached on a fielder’s choice that gave the Badgers a 5-3 lead before the first out of the inning had been recorded.

With two outs, Bosse singled home Jenkins and Max Janssen singled to put runners at the corners. Jacobs followed with an RBI single and Bergmeier reached on a dropped third strike to keep the inning going. Brown and Brent then hit back-to-back singles to close out the scoring.

“Hitting was contagious in the inning, especially for us today,” Burzanko said. “Fundamentals win baseball games and in that big inning we put the pressure on hitting the ball to all fields and then running the bases aggressively and it resulted in eight runs.”

Brown led the Badgers with three hits and Jacobs, Brent, and Bosse each finished with two.

With the win, the fourth-seeded Badgers advanced to the Struthers District where they’ll play No. 5 New Middletown Springfield in a semifinal on Monday at 6:30 p.m.

“The guys are going to have to bring the energy early and find a way to get out to a lead and play from in front,” Burzanko said. “The further you go, the tougher the games are to win and it comes down to executing on both sides of the baseball and trying to play as loose as possible. If we play the way we are capable of then everything will take care of itself. The guys have to come with a championship-winning mentality and understand we have to grind it out and do what is needed to be done to win and advance. I think our guys are up for that challenge.”

Hornets grind out win over Badgers