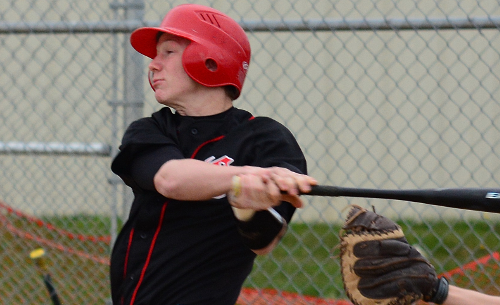 Cardinal bounced back from Thursday’s disappointing loss to rival Berkshire with a 17-7 six-inning non-conference win at Cornerstone Christian Academy on Friday.

The Huskies got off to a slow start but took a 1-0 lead in the second inning and added 10 more in the third to take control of the contest.

“We definitely carried over that mentality we had against Berkshire,” said Cardinal coach Brian George. “We started off with a 1-2-3 inning that first inning and then we exploded in the third. We had some good at bats and hit the ball all over the place and Alan Michener did enough to get us the win.”

“He did what he had to do and for the most part got us out of innings,” George said. “He got up to around 100 pitches and we didn’t want him to go further than that so we brought in Cameron (Saliga) and Cody (Purpura) finished it off.”

KC Cress, who finished the game 4-for-5 with three runs scored and three runs batted in, singled to lead off the second. He stole second base and scored on Joe Tucker’s double to give the Huskies an early 1-0 lead.

The Patriots tied it in the bottom half of the inning on two walks, a hit batter and a sacrifice fly but the Huskies responded with nine in the third.

Cardinal scored all nine runs without making an out.

The Huskies took advantage of three walks and a hit batter and Cress, Clark Thurling, Evan List, Blake Hershberger and Brendan Whitney all had hits in the inning.

“We kind of spread it all around,” George said. “Guys were hitting the ball and putting it in play. We had three walks to load the bases and Clark ripped a single, KC and Evan singled consecutively and drove in runs. Blake Hershberger, who had to fill in for Joe (Tucker), had a big hit in the inning.”

Cardinal added five more in the fifth and two in the sixth to secure the run rule.

Thurling, who tied Cress for the team lead with three RBI, and List each had two hits for the Huskies.

Cardinal travels to Garfield Heights on Saturday for a doubleheader with the host Bulldogs and Trinity.