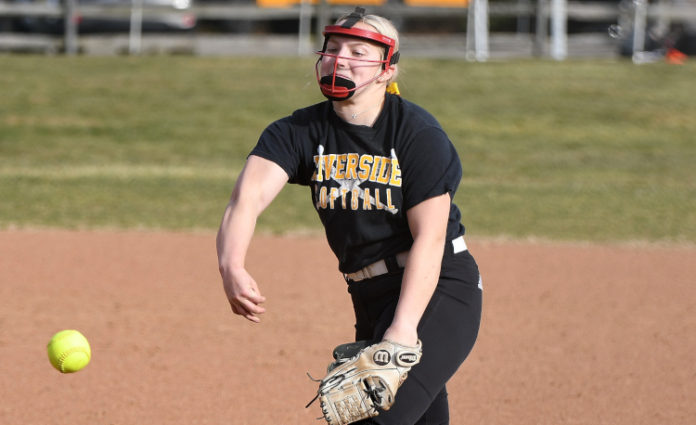 The Beavers scored four runs in the second and five in the fifth, to go along with the two insurance runs they added in the sixth, to beat the Blue Devils, 11-5.

“It was a good win,” said Riverside coach Bill Ross. “I definitely think Wickliffe is better than their record. They definitely had some hitters throughout that lineup, so it was good to come out with a win. We have a lot of games this week so it was huge for momentum.”

Wickliffe took a 1-0 lead in the first when Laylah Ruscin opened the game with the first of her two triples and stole home.

Riverside rallied with two outs in the bottom of the second to take a 4-1 lead.

Abby Watson started the rally with a two-out single, Kayla Bobeczko drew a walk, and Megan Lehner singled to load the bases. Emma Kovalchuk and Amanda Kolar each hit two RBI singles to close out the inning.

Ruscin tripled and scored in the fifth to pull the Blue Devils to within 4-2 but the Beavers responded with five in the bottom half of the inning to pull away from their visitors.

Emily Lamos, who also picked up the pitching victory, started that rally with a triple.

“As a team, we started off slow at the plate but it was really nice to see that my triple helped spark our offensive into the powerhouse that it is,” Lamos said. “As a pitcher, it’s always nice to trust that your offense can work you out of any situation that you may end up in. It’s always exciting being able to help my team not only on the mound but at the plate as well.”

Delaney Keith reached on an error that allowed Lamos to score and Maren Kelly singled to set the stage for Katie Ross, who belted a two-run double. Watson and then Lehner sandwiched a pair of doubles around a strikeout to push the Riverside lead to 9-2.

Wickliffe scored two runs on four singles and a walk in the top of the sixth but, again, the Beavers responded.

Lamos led off the Riverside sixth with a double and her pinch runner, Grace Fisher, scored on Keith’s single. Kelly then doubled and Ross hit a sacrifice fly to score another run.

Lehner, Kovalchuk, Lamos, Kelly, and Watson all recorded two hits on the day for the Beavers, who finished with 13 as a team.

“It was contagious hitting,” Coach Ross said. “We had two really big innings. Once someone started hitting, I think one inning we had three doubles back-to-back-to-back. They were just peppering the fence.”

Lamos did the rest as she struck out 13 Wickliffe batters.

“She was hitting her spots,” Ross said. “She was working the plate well and mixing up her pitches. I thought she did a good job controlling the game.”

Lamos did allow four unearned runs on eight hits but she never let the Wickliffe hitters settle in at the plate.

“Coach Ross’s pitch calling really helped keep the Wickliffe hitters guessing at the plate,” she said. “We were working both sides of the plate, which is essential with a team like Wickliffe that didn’t give up in the box.”

Riverside, who improved to 3-0, hosts Lake Catholic on Tuesday.

Beavers rally for win at Fitch