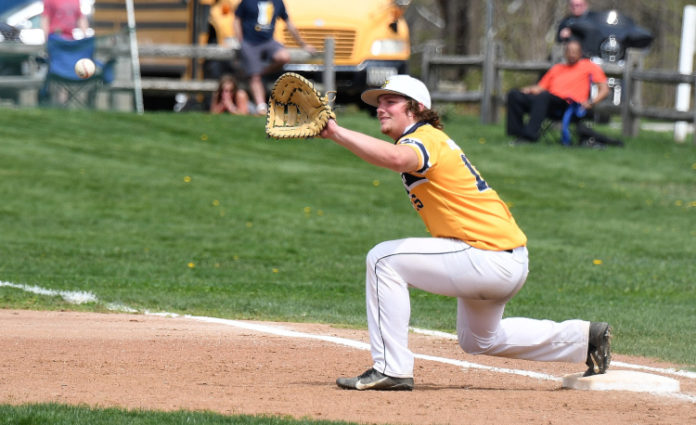 Big innings helped Kirtland to climb out of an early hole at Cuyahoga Heights and extend its winning streak to eight games.

The Hornets, who trailed 3-0 early, scored six runs in the fifth inning and 10 in the seventh to pull away from their hosts, 19-6.

“Early on, we were trying to crush the ball instead of putting the bat on the ball,” said Kirtland coach Luke Smrdel. “In the fourth, we talked between innings about having to make a move now and the importance of getting base runners. Once we made that happen, things went our way.”

Cuyahoga Heights scored one run on two hits and two walks in the bottom of the first inning and added two more in the third on a walk, a single, and a double.

Kirtland pulled to within 3-2 in the third.

Cuyahoga Heights took advantage of an error in the bottom half of the inning and scored two runs to push its lead to 5-2.

It was all Kirtland after that.

Reese VanArnhem doubled to lead off the six-run fifth inning. Danny Davidson drew a walk and Anthony DeMarco cleared the bases with a two-out triple. Withrow then drew a walk and scored on Sullivan’s triple. Knaak drew a walk and stole second and both Sullivan and Knaak scored on Andrew Spencer’s single that left Kirtland in the lead, 8-5.

VanArnhem singled in the sixth and scored on Mason Sullivan’s single to push the Kirtland lead to 9-5.

Two walks and a double lead to a Cuyahoga Heights run in the bottom of the sixth but the Hornets slammed the door with a 10-run seventh.

A total of 16 Hornets batted in the inning. When the dust cleared, the Hornets had taken advantage of six walks, three hit batsmen, and an error.

“I am very happy all of the guys made adjustments at the plate,” Smrdel said. “We need to be able to produce runs by getting guys on base. That’s something we’ve always done over the years.”

VanArnhem and Spencer both finished the day 2-for-4 with a pair of runs batted in.

Gage Sullivan made a game-changing catch in the bottom of the fourth inning as Cuyahoga Heights had already scored a run and had another runner on base when a ball was hit into the gap in right-center field.

“He made the best catch I have ever seen a high schooler make to get us out of the fourth inning,” Smrdel said. “It was a huge momentum-changer and really got us rolling. He dove with his back to the plate. I don’t even know how he caught it.”

Hornets hold off Badgers in Go 4 the Goal game